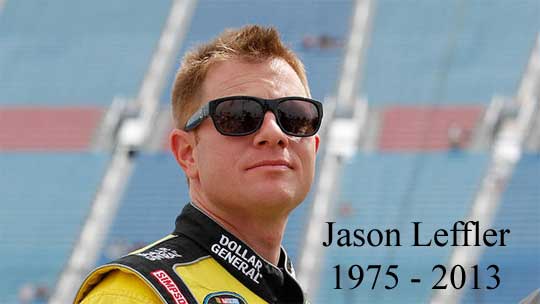 Sprint cars have increased power-to-weight ratios which make for top speeds of 140 miles or more on a given track. These high-powered races are held on short oval, circular dirt or paved tracks. 900 horsepower is natural for such machines that typically have a 410 cubic inch engine displacement.

Leffler had been reduced to racing dirt car events after losing his NASCAR position with his team. Initially signed to Joe Gibbs Racing, he ended his run on the major circuit with Ganassi in a one year season deal.

Justin Wilson, IndyCar driver, tweeted, “Another reminder of how this sport we love can be so cruel.” Lower division sprint racing, as evidenced by Leffler, is a bit more perilous due to the lax safety rules as compared with NASCAR Indianapolis 500 competitions.

Josh Burton, 22-years-old, died as a result of a crash in Indiana at Bloomington Speedway. In addition, two other drivers died in a race at a Nevada dirt track in May. In California two individuals were killed at a dirt track when a car lost control, spinning off the roadway.

Drivers throughout the industry paid homage to Leffler by way of social media. NASCAR driver Clint Bowyer stated, “So sad to hear about Jason Leffler. Was a wheel man and a fun fun person to be around.” IndyCar driver Ed Carpenter tweeted, “Praying for all of Jason Leffler family, especially little guy Charlie.”

It is noted that safety in sprint car racing has improved within recent years, with newly mandated regulations; the use of roll cages to protect drivers. Fuel tank bladders to prevent fuel leakage; use of six to seven-point safety harness seat belts no less than two years old and the move to use alcohol fuel are an example of a few processes designed for increased safety measures in the sprint race industry.

A statement was released by NASCAR extending thoughts, prayers and sympathies to the family of Leffler. “For more than a decade, Jason was a fierce competitor in our sport and he will be missed,” it read.

NASCAR’s suspected lax safety measures in lower division competition should be scrutinized in light of Leffler’s accident. It is suggested by industry insiders that more be done to standardize practices. Jason Leffler was a single father and leaves behind a son, Charlie Dean.