Joy And Pain Of Motherhood

Born with glowing “peaches and cream” skin, a halo of blond curls and sapphire blue eyes, Angel Salvatory was a beautiful anomaly: a white-skinned baby born into a rural village in Tanzania whose residents were all dark-skinned. Angel’s albino-colored skin made her a target.

“Her father thought she was a gift from God,” spoke Salvatory’s mother, Bestida Simon. “One that he could use to get riches.”

Since surviving a brutal attack led by her very own father, Angel has spent her young life living in the government funded Kabanga Protectorate Center: a safe haven for people living with albinism.

“Angel’s father led a group to attack her. He had wanted to attack her since she was 3 months old. He thought if they’d take Angel to a witch doctor as a sacrifice that they could get rich,” Simon said.

In Tanzania’s traditional villages, albinos are viewed as “ghost devils”, a source of powerful magic. Since 2006, more than 100 albinos have been chased, stoned, beaten and burned. 71 died. Long ignored and neglected in their own country, albinos living in Tanzania now have a ray of hope in the form of increased governmental protection and assistance.

At the April 2012 session of Parliament, members listen to emotional testimony moving many to tears. Members voted to donate a portion of their salaries to the cause while others simply suggested voting to make sunscreen tax-free.

Speaking as a program officer with the Tanzania Albino Society, Severin Edward advised that the Tanzania Parliament promised to provide funding for the special needs of people with albinism. Edward said the government agreed to “fast-track” the requests by albinos and offer special priority for their court cases.

Commonly called ghosts or “zero-zero” (a Swahili slang signifying someone is less than human) albinos are excluded from society, ridiculed, tortured and killed. Traditional Tanzania folklore claims that even when you kill an albino, he or she really never dies.

The majority of the brutal attacks against albinos are led by village witch doctors seeking to use albino body parts in spells and potions intended to bless the participants with great wealth and longevity. 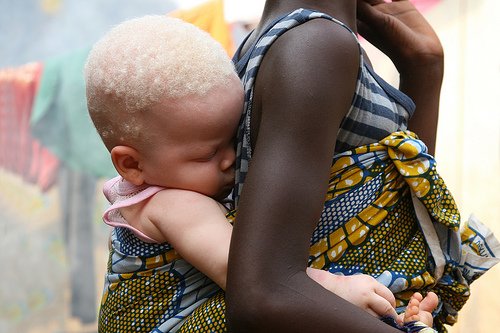 In response to the atrocities against albinos, the government initiated a program to “round-up” adults and children with albinism and place them in safe houses. Even though the safe houses offer a degree of protection, many albinos so housed feel they are nothing more than prisoners.

Peter Ash, Founder of the advocacy group Under The Same Sun, said the safe houses were provided as a response to a wave of negative stories generated by Western journalists writing about the upsurge of albinos killed in 2008.

Helen Sekalima, 40, and 2 month-old baby Jessica, are typical residents of the safe house program. A dark-skinned mother, Helen sought refuge at the Kabanga Protectorate Center after the life of her infant daughter Jessica was threatened.

“The people in the village said that the children are not normal people, that they are like devils,” Sekalima said. Anderson Naimoni, Helen’s husband, said he doesn’t alike the idea of centers where, “our people are being turned into refugees.”

Ash told reporters his group discovered that in some centers emotional and even sexual abuse “was rampant.” Ash said his group informed the government “but they’ll probably do nothing about it. 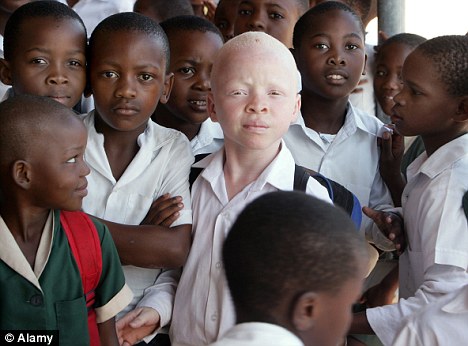 FOX News reports, “Experts say staving off attacks from witch doctors is just one of many issues that Tanzania’s albino population must address. Low vision problems complicate schooling, and with little cultural precedent for skin protection rates of skin cancer are high. More than 80 percent will die by age 40 due to skin cancer, Ash said. In rural northwest Tanzania dried corn stalks sway gently in a field sheltering a concrete slab that protects the grave of 3-year-old Naimana Daudi from grave robbers. The albino toddler was kidnapped at night and found in pieces in the morning. A tear slips down the dark cheek of her mother, 30-year-old Angelista Ngarama. After her daughter was killed, Ngarama took her youngest child, Ferister, to the Kabanga Protectorate Center. No one knows when it will be safe enough for the 2-year-old to return home.”

AllAfrica.com, reports that albino prejudice isn’t limited to Tanzania. The article notes, “In superstitious societies of Africa, women who give birth to children suffering from disabilities including albinism are often ridiculed. In extreme cases the women are banished and the children murdered. This is because society has very little understanding of these phenomenon that women become the easiest scapegoats on which to place the blame.”

In a country wrought with racial tensions, centuries old superstitions and millions of people born with disabilities, we are happy to report the birth of a little baby girl, born with albinism who is cherished and loved by her Nigerian black family.

Namibia: The Joys and Pain of Motherhood