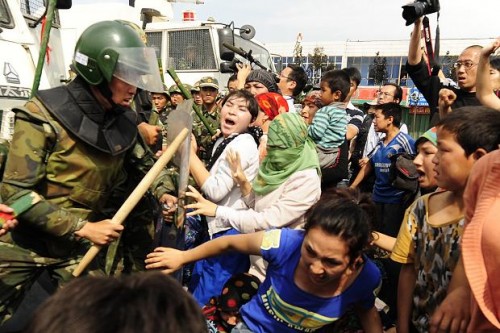 Following violent unrest in the town of Lukqun, in China’s western Xinjiang region late June, China has accused the United States of fueling terrorism. The US, however, was not the only culprit, according to Chinese state media; both the Syrian government and the opposition forces fighting to topple it were allegedly responsible for training Muslim extremists and sending them to ferment trouble in Xinjiang.

The Chinese Communist Party-owned Global Times did not make it clear how the Syrian government was involved, but alleged that members of the East Turkestan Islamic Movement (ETIM), who had fought in Syria, were selecting and training individuals “to sneak in to Chinese territory to plan and execute terrorist attacks.”

The official Chinese Xinhua news agency had reported that , on June 26, a mob armed mainly with knives had attacked a police station and other sites in Lukqun. The attack led to a confrontation with security forces and around 35 people were reported dead. Two days later, according to the news agency, a group of more than 100 people, armed with knives and riding motorcycles, provoked “riots” and began attacking people “after gathering at local religious venues”. A police station was also, apparently, attacked by the mob, described by Chinese authorities as “terrorists”. Following these incidents, the US State Department called for an investigation into the incidents and said it was “deeply concerned about ongoing reports of discrimination against and restrictions” on China’s ethnic Uighur population. In response to this statement, the People’s Daily – another Communist Party publication – accused the US  of “conspiring to direct the calamity of terrorist activities toward China.” In addition to apparently pointing the finger at the US government, the regime in China also holds the western media and public opinion to blame. An editorial in the Global Times claimed that “Western public opinion is fooling these ignorant extremists through cheap support.”

China has had problems with Turkic-speaking, Muslim Uighurs for some time. Reluctant to acknowledge home-grown unrest, however, the Chinese have routinely pointed the finger at outside influences, including neighboring Pakistan. In 2009, some 200 people were killed in riots. Xinhua, home to most of China’s minority Uighurs, is a highly segregated region; the Han Chinese – the major ethnic group in China – have increasingly settled the region, which is rich in natural resources.

Refusing to acknowledge ethnic friction and repression, Chinese authorities describe those stirring unrest as terrorists and extremists. The People’s Daily editorial accuses them of using “religious extremism to confuse the masses of believers,” and went on to say that they “have expanded their power in waging a so-called ‘holy war’.”

With all eyes on the continuing conflict in Syria – along with a dozen other trouble-spots around the globe that are, in fact, proxy wars in the battle for Islam – the Chinese are ever more anxious to play down their own issues with Muslim extremists. Accusing the United States of fuelling terrorism seems likely to be another attempt to deflect from the country’s internal problems.