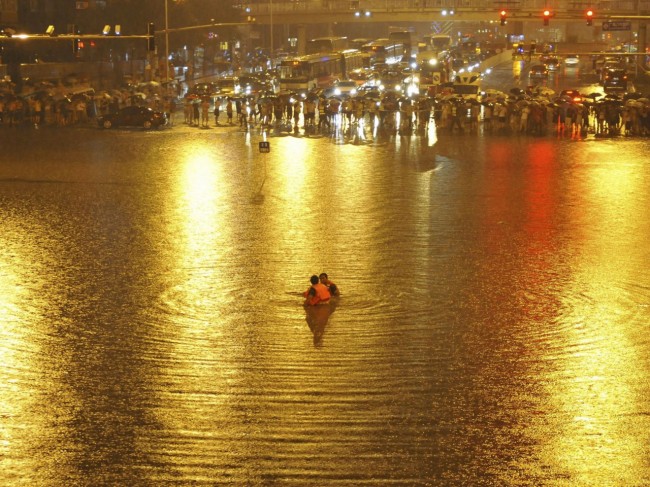 The worst rainstorms and flooding in five decades have flooded large areas of southwest China, washed out bridges, and set off a landslide that buried dozens of people and also destroyed a memorial to the victims of the 2008 earthquake in Sichuan Province. That earthquake flattened large parts of the same area. The severity of the widespread flooding and the incompetence of the government in dealing with it has some people already calling this disaster China’s Katrina.

According to the state-run media on Wednesday, the heavy rains there that began last weekend have disrupted two million lives and killed more than 50 people across China.

It’s homeowners in the mountainous areas of Sichuan that include some of China’s most spectacular scenery who have been among those who have suffered the worse of the flooding. Just as in America, some experts in China argue against the development of areas which are prone to be subject to natural disasters, such as the cities along the Min, Fu and Jian Rivers, which meander through the steep canyons of the region.

On Wednesday, a rain-soaked mountainside gave way, burying 11 homes and as many as 40 people. According to Xinhua, the state news agency, rescue workers and sniffer dogs from Chengdu, the provincial capital, were rushing to the area. It has only recently recovered from the 2008 earthquake, which left 87,000 dead or missing.

A bridge across the Tongkou River collapsed on Tuesday, sending six vehicles into the water, according to the state news media. Twelve people, at least, were still missing and presumed dead.

According to a report in The Indian Express, the government of quake-hit Shifang City said floods and landslides caused by rainstorms have left five people missing and one person severely injured.

The newspaper also reports that in Yucheng District, at least 16,900 people in 4,920 households in the district have been affected.

Also flooded was the ruins of the city of Qushan, the former county seat of Beichuan, once a city of 20,000. It was destroyed by the earthquake.

According to Xinhua, 23 feet of water has flooded a recently opened museum commemorating earthquake victims. The survivors have long since been moved to a new town center, and officials there had set aside about 10 square miles as a memorial; now, the memorial is underwater.

A newspaper based in Shanghai, the Oriental Morning Post, urged the government to better protect the memorial area. The land contains the remains of hundreds of people whose bodies were never recovered from the rubble.

The editorial in the newspaper said:

If we don’t take effective measures, in another 10 or 20 years the ruins might not be there at all.”

The newspaper had no advice for how the government could protect its citizens from heavy storms and flooding, however. It was silent on that count.

People’s Daily reported that in Shanxi Province, to the north, 12 workers were killed Tuesday night when a violent rainstorm caused the collapse of an unfinished coal mine workshop they were building. The newspaper cited a statement from the city government of Jinzhong, where the accident occurred.

During China’s Katrina, as the combination of nature’s wrath and man’s incompetence has been dubbed, much of the country has seen the worst rainstorms and flooding in five decades.