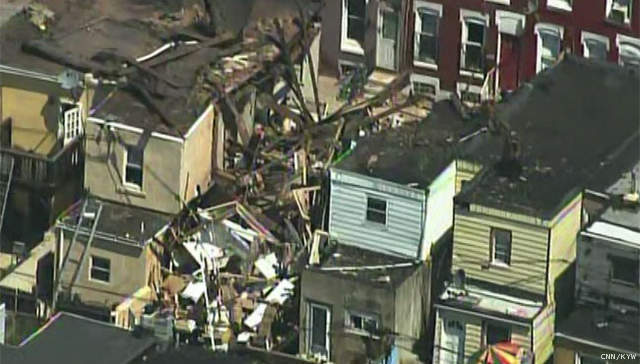 A contractor was working inside a South Philadelphia row home, which was being rehabbed, at 428 Daly Street when the explosion occurred, according to Philadelphia Police Deputy Robert Coyne. The row home exploded and collapsed sending eight people to the hospital.

The explosion destroyed at least three homes along Daly Street. Daly Street sits in a residential area of South Philadelphia, populated by row homes. From the air, debris of wood, brick and glass can be seen strewn in all directions. The contractor was critically injured after suffering severe burns to his shoulder and arms. He was taken to the Hospital of the University of Pennsylvania for treatment. Seven other people were hurt, including a teenage girl who lived next door, two infants and four other adults. It’s not clear at this point in time if one of those infants was the boy that Iman Sedaris carried off to safety. Sedaris said he ran, with his family, to the shelter of a brother’s home nearby and then tried to return to the scene.

Sedaris was eating breakfast with his family and a friend when he said, “the earth shook and sand started blowing inside of his South Philadelphia home”. “I take my wife and my friend and my daughter, and we’re leaving, we ran outside,” Sedaris said, excitedly a couple of hours after the home two doors down exploded. “We left everything!”

Sedaris got out the front door and immediately saw his neighbor. “My friend, oh my God, he has a small baby. He ran outside, I saw him and he said, ‘Please, take my baby,’ and I took him.”

Sedaris lives at 424 Daly Street. His neighbor lived right next door to the home at 428 Daly that was leveled by an explosion around 11 a.m. Investigators suspect a gas leak. The contractor who had been working in the basement of that home when the blast occurred is the most seriously injured, with burns over 22-percent of his body.

“I came back to see if I could help others, but the cops came and said, ‘Please, nobody come back,” Sedaris said.

Emergency crews shut off traffic in the immediate area and went door-to-door to get people out of their homes, as a precaution. Utility crews are on the scene. Daly Street has been evacuated and six homes on Wolf Street, which is just South of Daly Street.

The explosion shifted the day into a panic-stricken morning for neighbors. A total of 25 people have been evacuated from the area, according to Deputy Coyne.

“I was upstairs brushing my teeth. I heard a very loud noise. Not being sure what it was, I came downstairs and went out my back door,” McColgan said. “I went outside and saw everyone running around the corner. I saw the building down, saw the smoke and smelled the horrible smell of gas as well.”  McColgan said,”It definitely was an explosion.”

Danielle James was leaning out her second-story window, talking to a neighbor at the moment of the blast.  “I thought somebody dropped a bomb in the middle of my block! It went boom! And then you just seen glass fly from over the roof,” James said. “I went through every room and took my kids and just said, ‘Get out now!'” James said her husband mentioned last night that he smelled gas.

Fire officials confirmed that it was an explosion and that they are investigating whether it was caused by a gas leak.