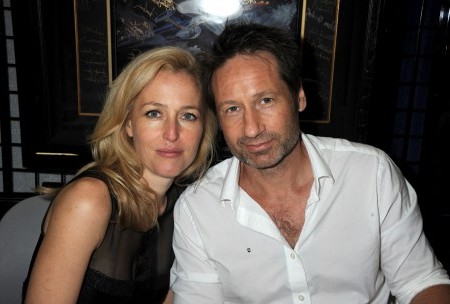 Gillian Anderson was the clear focus of attention during one of the high points of Comic Con. The X-Files 20th reunion was eagerly looked forward to and when the gang got back together: Gillian Anderson (Scully), David Duchovny (Mulder) as well as creator Chris Carter and writers/producers Howard Gordon and Vince Gilligan, the crowd were more than happy. But Anderson “stole” the panel as she talked about sex, X-Files 3 and her return to television after all these years.

The crowd approved of Mulder and Scully coming onstage with flashlights for a little nostalgic acting for the fans. Their “opening” of the panel in character prompted an enthusiastic standing ovation from the audience.

It was during the question and answer sessions where Anderson took the metaphorical ball and ran with it. She talked about how proud she was to have played a strong female character. But most of the audience’s questions had to do with sex and love between the two main characters. One of which being, did they ever have sex, on the show? Gillian said, “Well, something happened. Because we have a child,” She did say that a sex scene between Mulder and Scully had been filmed and never aired. The 44 year-old actress then said, “It’s somewhere.”

When the two actors were asked by a fan what the couple would do if they went on a date, Anderson got straight to the point, “Have sex.” Duchovny followed that remark with, “Then maybe dinner?” Show creator Carter then finished by saying, “I think it would be barbecue.”

While the questioning went towards whether or not the characters were really in love, panel host Michael Schneider from TV Guide magazine attempted to pin down Chris Carter on whether or not there was going to be a third X-Files film.

The X-Files creator was non-committal about the possibility of a third film in the X-File verse, as were the rest of the panel. Except for Gillian Anderson and David Duchovny. She’s very clearly up for going back to the world of Mulder and Scully. She said, “a film would be great!” And the 52 year-old Duchovny professed an interest in coming back as Mulder. He said, “I always thought whenever we can come back together, we would as much as we can. So we will.”

Earlier in the week, on Thursday, Anderson and Duchovny auctioned off a life-size cutout of Scully and Mulder for charity. Both actors used this as an excuse to get hopes up for a third film. Duchovny said, “This is how we’re going to get the movie made, by the way.” Anderson then followed up with, “This is our Kickstarter.”

On the subject of a third X-Files film Chris Carter had the last word. He said, “You need a reason to get excited about going on and doing it again, because it’s hard, hard work, but this is very inspirational.”

Gillian Anderson didn’t just talk about sex and the possibility of another X-Files film, she talked about how cool Mulder was and that it took her a few years to figure that out. She also talked about returning to television after such a long time away.

When the question of why she’d taken so long to return to the small screen, Anderson answered, “Mostly because of the time commitment. When the series ended, I didn’t know if I wanted to be on another set again, period, for a long time, just out of exhaustion.”

Gillian did add that, “after enough time passed, I was looking at the material coming my way after saying no for such a long time — it’s just about timing. When ‘The Fall’ came across my desk, it was exactly the the type of material I respond to and would want to watch and I feel very strongly about that piece. And initially, NBC then offered me a short arc on ‘Hannibal.’ I thought it would be the three episodes and I said I wouldn’t be likely to do more than that.” She continued, “But I had so much fun with Mads Mikkelson, I kept doing more!”

The fact that the X-Files and both Gillian Anderson and David Duchovny are still loved by fans, who definitely want to see another film come out is obvious. The panel and the crowd had a good time talking sex, X-Files 3 and hearing all the stories and feelings of the main cast and the shows creators. It was clear by their interaction that the whole gang really enjoyed getting together and re-living their memories, as did the Comic Con crowd.