McDonald’s Employees: ‘Not Loving It’ 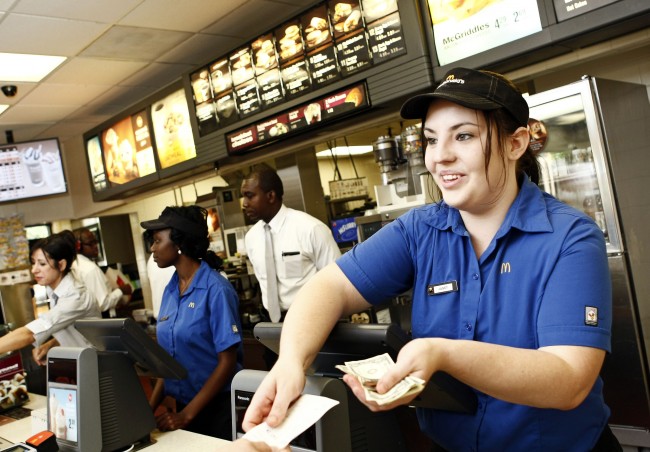 In a spirit of benevolence, McDonald’s gave its employees a sample budget, to help them with their monthly expenses.  The first line lists their ‘primary job,’ and the second says ‘secondary job.’  They are obviously aware that they do not pay a ‘living wage.’  And, McDonald’s employees are ‘not loving it.’

CNN interviewed four of the fast food chain’s employees.  The following are their posted results.

The first employee was a 21 year old college student.  Besides attending classes, he works approximately 25 hours a week at a McDonald’s.  This nets him about $525 a month.  He lives with his mother and little sister.  His tuition is $180 per month, but the university is allowing him to pay half until he graduates.  After he pays his fair share of the monthly expenses in his mother’s home, he is penniless.

Employee number two is a single father with two children.  McDonald’s pays him $7.40 per hour.  His children attend a charter school, which does not have a bus to transport the students.  He has to pay for bus or cab fare every day to get them to school.  Besides his normal housing expenses, he pays $100 a month for child care, and $100 a month for prescription drugs.  He nets around $1,000 per month.

Employee number three nets about $415 per month.  He gives half of it to his daughter’s mother.  His rent is $600 per month, and his gas bill is $160.  He admits to borrowing money from family and friends to survive.  He is forced to eat most of his meals at McDonald’s.

Employee number four has been working for McDonald’s for 21 years.  He works at two McDonald’s to ‘get enough hours.’  He nets just over $600 per month.  After he pays his rent and other expenses, he has difficulty paying for a monthly bus pass, and his prescriptions.

President Obama’s proposal of raising the minimum wage to $9.00 an hour has the fast food giant in a state of panic.

Recent surveys show the vast majority of Americans are unhappy with their present employment.  In addition, as the President pointed out, earning the minimum wage, and working 40 hours per week, places that person in the poverty level.

A great many of ‘fast food’ employees depend upon food stamps for theirs, and their family’s survival.

McDonald’s worldwide nets one and one quarter billion dollars every quarter.  It is merely another example of corporate profits rising to record levels, while the working class has experienced a decline in the last 10 years. (2010 United States Census Bureau.)

NAFTA and other arrangements made by our government without the approval of voters, has allowed some of our nation’s best paying jobs to be sent to other nations, where they are allowed to pay wages that are half or less of those in the United States.

Electronics, Textiles, and food processing plants, among others, have packed up their factories and moved beyond America’s shores.

It’s not difficult to see why McDonald’s employees are ‘not loving it.’

One Response to "McDonald’s Employees: ‘Not Loving It’"