Airbnb The Next eBay? Uber The Next Amazon? 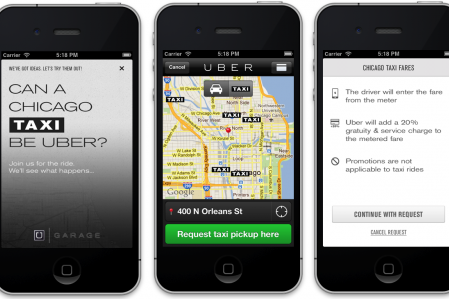 If you haven’t heard of Uber or Airbnb, I hadn’t either, but when coming across them in an assignment I had to look into them to see what all the talk was about. Well, these two are useful tools if you live in the appropriate area and traveling to a specific location. Could Airbnb become the next eBay, or Uber become the next Amazon?

Uber is a venture-funded start up company based in San Francisco, California that makes a mobile application that connects passengers with drivers of luxury vehicles for hire. The company arranges pickups in the San Francisco Bay area, New York City, Los Angeles and several other major US cities, as well as in other locations world-wide, such as Toronto, Paris, Berlin, Amsterdam, London and Sydney. Uber drivers have cars such as Lincoln Town Cars, Cadillac Escalades, BMW 7 Series, and Mercedes-Benz S550 sedans. Cars are reserved by sending a text message or by using a mobile app. Using the apps, customers can track their reserved car’s location.

Airbnb is a privately held company headquartered in San Francisco and founded in August 2008. Operated and privately owned by Airbnb, Inc. The company is an online service that provides a platform for individuals referred to as “hosts,” generally private parties, to rent unoccupied living space and other short-term lodging to guests. As of November 2012, the company had over 250,000 listings in 30,000 cities and 192 countries. Listings include private rooms, entire apartments, castles, boats, manors, tree houses, tipis, igloos, private islands and other properties. Users of the site must register and create a personal online profile before using the site. Every property is associated with a host whose profile includes recommendations by other users, reviews by previous guests, as well as a response rating and private messaging system.

Now that you have some information on them, are they the way of the future in rentals and in transportation? Could Uber be the next Amazon? Could Airbnb be the next eBay?

“For us this is really about giving consumers another choice,” Rachel Holt with Uber D.C. said. Uber CEO Travis Kalanick has been open about the fact that the company is testing delivery of various products. A focus on delivery of products–not just people – would add a whole new business for Uber, while still using its core technology and expertise.

In a recent interview, Kalanich said “I mean, the way we look at what Uber is, is it’s the cross between lifestyle, which is give me what I want and give it to me right now, which we’ve seen online, right? We all remember, it was like instant gratification. It was like the wave of the future in the early 2000s, right? Give me what I want, give it to me right now, and the logistics to get it to you, right? So today, we’re in the business of delivering cars. We’re delivering a car to you that you, then, can do whatever you want with. Well, the car has a driver as well. But we’ve done things like last Friday, we did Uber ice cream. 33 cities around the world. It was essentially on-demand ice cream trucks, right? So the answer is, yes, we’re thinking about it. What we’re doing right now is we’re in the experimentation phase where you sort of find some interesting ways to do promotions like Uber ice cream.”

For the ever-evolving e-commerce sector, we see companies trying to make same-day deliveries with the added note of knowing what others have experienced with that company instead of finding out for ourselves. Finding something that is unique localized, and personal, not dealing with big named brand companies. “From the desire for local and real experiences, from keeping costs down instead of global shipping, the market force for local, personalized experiences will only increase,” stated Jeremiah Owyang, an analyst and partner at Altimeter Group. Having your own driver is a great price point and no need for strange fees that taxi’s may give for going a certain distance. But Holt said some District cabs are tapped into the Uber system. However, the D.C. Taxicab Commission has expressed concerns the car’s Uber is using are not licensed for the services they’re providing.

Do you believe that Uber is taking Taxi driver’s paychecks away? Or is this the wave of the future and Taxi companies will need to get in the game of allowing a customer to rate their experience, and offering nicer and unmarked vehicles? Is this like the movie Transporter in the way that it is in most cases a nice luxury vehicle, with a driver?

Uber has delivered BBQ to conference attendees at South By Southwest and delivered roses on Valentine’s Day. It has also experimented with other forms of transportation such as helicopters and boats.

While Airbnb currently focuses on sharing homes and other spaces for travelers, Airbnb could collaborate with service providers such as restaurants, retailers and artisans to help travelers. Your dwelling becomes their place of stay, and you become a host or hostess. With great reviews not only will you know what needs to change, but how you can make your guests happy. This also helps those with extra space to host someone who has or has not been to the area someone to help them experience things on a more personal level. Possibly becoming friends, or having them return. No need to get a hotel when you can get an entire house.

With the power of having others rate the house or apartment, even just a room. It allows others to know if it is a good place to rent or not. That doesn’t mean Airbnb won’t expand into other areas outside of travel. Since Airbnb has such a large marketplace, it has the marketplace expertise, as well as the buyers and sellers to build out another vertical. It also has the expertise, specifically in the sharing economy, which is much different from other online marketplaces.

Is Airbnb a good thing or a bad thing? Would it depend on your quest? Would you open your house or apartment up to a stranger? In the future, commerce will be on-demand available at the touch of a button on your app.