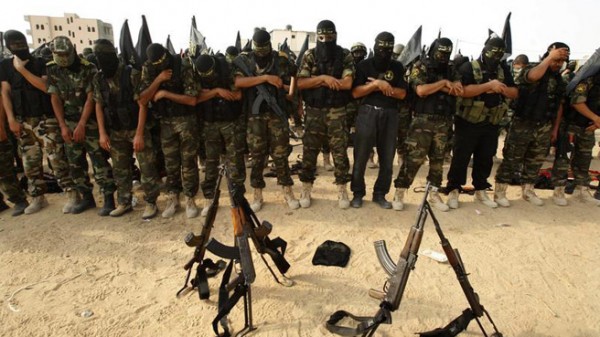 The Lebanon branch of Al Qaeda, the Abdullah Azzam Brigade, took responsibility for the rocket attack carried out Thursday on Israel. Abdullah made this announcement on Twitter. Earlier, four rockets fired from the Lebanon territory reaching the Northern part of Israel Thursday. One rocket was intercepted by the Iron Dome missile defense system and no injuries were reported, according to the Israeli army in a statement.

Israeli army said that two others rockets fired from a location south of the Lebanese port city of Tyre, 19 kilometers (12 miles) north of Israel, landing in populated areas, damaging property.  Nobody was killed or injured. The rockets triggered sirens and sent residents to scurry for shelter in an attack that rattled a long calm along a border infamous as a tinderbox.

Israeli military attributed the attacks to a movement called the Global Terror Organization. Isreal’s army spokesman, Brigadier General Yoav Mordechai said in the statement that Israel holds the Lebanese government and military responsible for the attack. “That was the first rocket barrage from Lebanon since November 2011,” he said.

The Lebanon branch of Al Qaeda, the Abdullah Azzam Brigade’s local branch claimed responsibility for the attack- publicly, on Twitter. The group, related to Al Qaeda, are made of Salafist militants from across the region.

Lebanon’s president, Michel Suleiman, condemned the attack and ordered the Lebanese security forces put a hand on the attackers and bring them to justice. Suleiman said, according to the Lebanon’s official National News Agency, the attacks violated the 2006 United Nations agreement ending the month long war between Israel and Lebanon’s militant Shiite Muslim Hezbollah movement.

Lebanon’s official news agency reports that the Lebanese army found launchers used to fire the rockets in the Tyre area.

According to the Jerusalem Post, Galloway said “Israel gave them the chemical weapons.” He made his statement while a group of United Nations investigators areon  the ground in Syria, analyzing allegations of the use of chemical weapons that caused dozens of deaths in the country- in turmoil for over two years. More than 100,000 have been killed in Syria’s civil war, according to UN estimates. Both Assad, the Syrian president, and the opposition are accusing each other of using the chemical weapons.

The UN mission said it won’t be easy to determine who really used the massive destruction arms. UN investigators will just determine if such weapons were really used. Amateur videos posted by Syrian rebels show dozen of people killed and others writhing in pain after being bombed by what seems to be chemical weapons. The Syrian opposition said in an unconfirmed report that more than 1,300 were killed in a chemical attack near Damascus.
Eddy Isango