Fighting in Syria and Heavy Shelling in the City of Homs 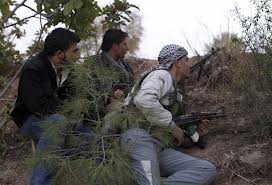 There are reports of the Free Syrian Army attacking a base in Aleppo Syria.

A car bomb was exploded and machine guns are being used in the fight against Assad forces.

Aleppo is Syria’s largest city. There are also reports of heavy shelling in the city of Homs.