Jacob Zuma – How Many Wives Are Enough? 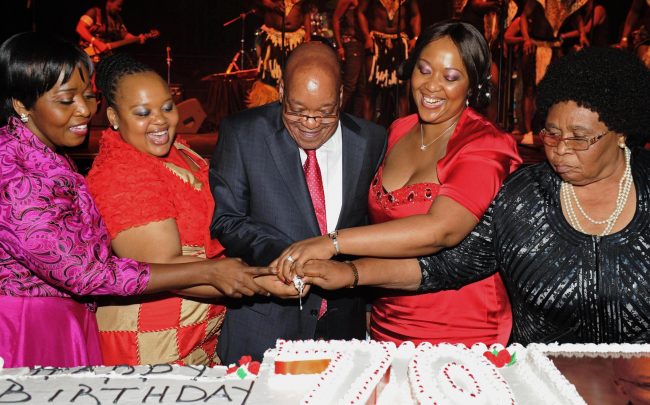 South Africa – Polygamous president Jacob Zuma has wed six times during his lifetime and we ask how many wives does a president need?

A recent survey concluded that 83 percent of women were not in favor of polygamy. Although polygamy is still legally recognized in South Africa, it is becoming less common as the western and modern lifestyles continue to replace cultural and traditional beliefs.

President Jacob Zuma has married six times and has twenty-one children. One of his wives has died and one divorced him.

Wife number 1 – Jacob Zuma met Gertrude Sizakele Khumalo during 1959 and married her after his release from prison in 1973. She lives at Nkandla, Kwazulu Natal. This marriage did not yield any children. This woman is regarded as a quiet and shy person. The matriarch of Nkandla.

Wife number 2 – Everybody knows Nkosana Dlamini-Zuma, a cabinet minister since 1999. During his exile years, Zuma married Nkosana Dlamini whom at that time was a medical officer working in a Swaziland government hospital. The couple has four children, and she divorced him in 1998 and cited the reason as ‘irreconcilable differences’. She is still active in politics and a senior member of the ANC party.

Wife number 3 – From Mozambique, Kate Matsho, who worked as an airline staffer, became the third Mrs. Zuma, the couple had five children. Sadly, she committed suicide on December 8 2000 after apparent strained relations within the marriage. A tragic death that gave an insight into life as a Zuma wife. She left behind a suicide note and virtually banned Jacob Zuma from attending her funeral. The note was a reflection of her distress and she pleaded with Jacob Zuma to take care of their children and remember his obligations as a father. Kate was a victim of a traumatic and painful marriage.

Wife number 4 – A young women born in 1975 married Jacob Zuma in January 2008. The couple met through social circles a few years before legalizing their relationship. Nompulelo Ntuli the fourth wife and has three children with the president. She admitted does not like the hype surrounding his public life.

Wife number 5 – Thobeka Stacie Madiba married Jacob Zuma on January 4, 2010. The couple had a baby in 2007 and the same year in which Zuma paid lobolo to her clan, thereby securing his permission to marry the young woman. It is said that before the traditional wedding, she had another out of wedlock child living with her.

Wife number 6 – Just over a year ago, during April 2012 Jacob Zuma splurged out on an extravagant wedding with wife number six. Gloria Bongekile Ngema married her prince at the Nkandla homestead with his three wives attending this lavish wedding.

A son named Edward was born out of wedlock from his relationship with Minah Shongwe, the sister of Judge Jeremiah Shongwe, who was recused from the Zuma rape case because of the association.

There are reports that he has another four children from affairs with different women from Johannesburg and Richards bay. Twenty-one children from six marriages and numerous affairs.

There are no specific responsibilities for the wives, and they have benefits of traveling and secretaries attending to their individual requirements. They are expected to support the president at the state and official functions. The state had to double its spousal budget after he took office with his large family.

During 2010, Zuma splurged out on a ZAR65 million upgrade to his Nkandla homestead. Recent reports of the legal expenditure of another ZAR200 million are being questioned.

The financial consequences of the polygamy of Jacob Zuma are borne by the South African taxpayers. A heavy burden indeed. From his six marriages, he had fourteen legitimate children.

Jacob Zuma is a traditionalist and has acknowledged all his wives and a few years ago told a television interviewer, “There are plenty of politicians who have mistresses and children that they hide so as to pretend they’re monogamous. I prefer to be open, I love my wives, and I am proud of my children.”

11 Responses to "Jacob Zuma – How Many Wives Are Enough?"