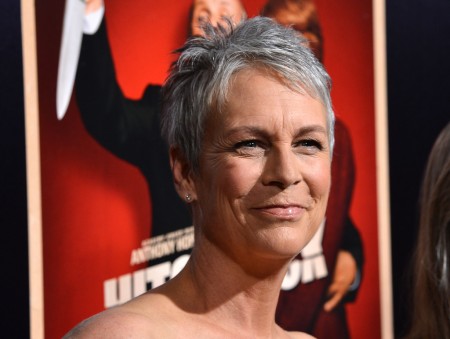 Halloween star Jamie Lee Curtis is back home after a short stay in hospital after the limousine she was riding in on Friday was involved in an traffic accident. Curtis got hold of Jodie Foster just before being driven off in an ambulance. Foster rushed to help Curtis and since the accident fans have used Twitter to tweet their support of the iconic star.

On Friday the 54 year-old True Lies star was taken to a local hospital after her limo was struck at the intersection of Pacific Avenue and Rose Avenue in Venice, California. Curtis told doctors that she was in pain, but she was given the all clear to leave the hospital and recover at home.

Curtis’ rep said that she was getting some “much needed rest” after her discharge and also confirmed that Jamie Lee had been in the accident. A spokesperson for the actress also told E! Online that, “Jamie was indeed a passenger in a car involved in a collision this a.m. She went to the hospital to be checked out, but she is fine and is home resting.”

While Curtis started her career in the 1970s, Foster has been working in LA since she was a child. The two have gotten close over the years. Ironically, Curtis starred in the remake of the 1976 Disney Film Freaky Friday which starred Foster.

Apparently, when Jamie Lee Curtis called the 50 year-old Foster, she arrived, according to eyewitnesses, almost immediately. Curtis and another passenger from the black Yukon SUV that hit a BMW were taken to the hospital. Allegedly, the driver of the SUV suffered more serious injuries than either Jamie Lee or the other passenger.

Not long after the news of Jamie Lee’s car accident Twitter began to fill up with supportive tweets from her many fans. Although Curtis hasn’t worked in horror films for some time now, she is seen as an icon in the horror genre. As well as starring in Halloween one, two and Halloween H20: 20 Years Later, she also worked in cult favourites The Fog and Prom Night. Starring in these films earned Jamie Lee the title of scream queen.

In the first of Wes Craven’s Scream films, the character of Randy is obsessed with Jamie Lee Curtis and it is while watching the film Prom Night that he first gets attacked by “ghost face.”

While Jodie Foster only worked in one film that could be considered horror, Silence of the Lambs, (which is really a thriller) the two women have developed a firm friendship. Firm enough that when Curtis was injured, Jodie Foster dropped everything to help out her friend. Foster is known for her loyalty to friends. She stuck by her friend Mel Gibson when the rest of Hollywood turn their collective backs on him.

Several of her fans sent Jamie Lee Curtis supportive tweets as she rested at home. Her pal Jodie Foster also got a few mentions, as the Twitter world seemed to be impressed by the fact that Clarice Starling had helped out Laurie Strode! But most just told Curtis to get better soon: 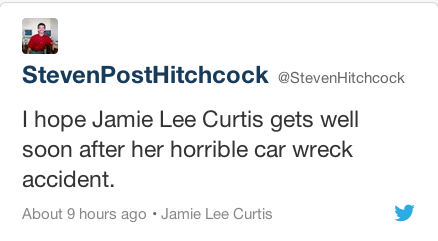