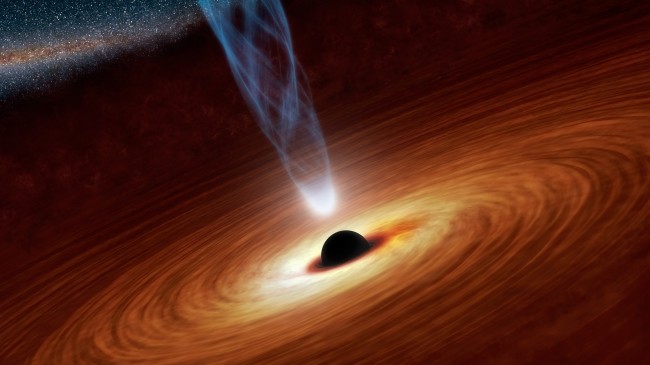 A bizarre magnetic field, within an elliptical galaxy, has created a spectacular display in space. NASA recorded its observations in a time-lapse video stream, showing a supermassive black hole throwing out superheated gas into the void of space.

The images were captured by the wide-field camera of NASA’s Hubble Space Telescope and appear to show a supermassive black hole, situated within the M87 galaxy of the Virgo cluster, under the influence of a helical-shaped magnetic field. The black hole is some 50 million light years from our planet.

One supposition suggests “seeds” are formed when a star explodes. These seeds are the precursors to supermassive black holes, which possess high solar mass, and then grow by accretion.

A proportion of the matter is irretrievably sucked into the black hole, due to its astonishing gravitational pull. On the other hand, some of this matter “queues up” in what is known as an accretion disk. An accretion disk forms around a massive body (typically a star or a black hole) and slowly revolves inward towards the body, under the forces of gravity. These accretion disks are readily detectable, due to the emission of radiation, generated by frictional and gravitational forces exerted within the disk. 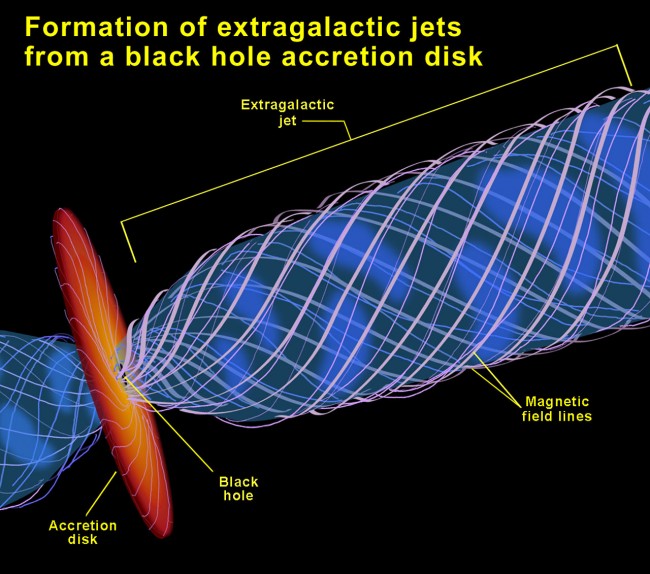 However, the magnetic field around the supermassive black hole is believed to have entrained some of the gaseous material of the accretion disk, causing a gas stream to be fired outward at high velocity over a distance of 5,000 light years. NASA’s Hubble Telescope captured the resultant path the plasma jet adopted, which indicated spiraling magnetic fields. The unusual, helical nature of this magnetic field is believed to have been instigated through the high-density accretion disk rotating constantly; this study represents the first time this spectacle has been observed, visually.

Eileen T. Meyer, based at the Space Telescope Science Institute, expounds upon the pioneering efforts of the team’s recent discoveries:

“Past observations of black hole jets couldn’t distinguish between radial motion and side-to-side motion, so they didn’t provide us with detailed information of the jet’s behavior.”

This is substantiated by findings that showed an intensely bright gas mass (knot B) following a twisting pattern, as it meandered through the spiraling gravitational field of the accretion disk. But why exactly was this jet stream made up of “clumps” of gaseous material, which altered in brightness? Meyer seemed somewhat uncertain over this unusual phenomenon, suggesting the clumps could be caused by either a ballistic mechanism or through unusual physics.

Her ultimate findings seemed to suggest both of the afore-mentioned contingencies to be plausible, with some clumps of material moving quickly, whilst others were transported at a more sedentary pace.

Interpretations from this 5,000-light-year-long gas stream, and the black hole from which it originated, provide scientists with an exciting new look at the underlying physics and, eventually, may even provide clues on galaxy formation. The team plan to detect and investigate a number of other jet streams to determine whether this behavior is universal to all black holes. It seems NASA’s Hubble Telescope has done it again.