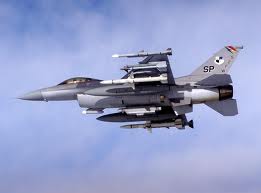 The Coast Guard says that an F-16C Falcon jet and another plane collided midair. The F-16 pilot ejected and landed in the water approximately 35 miles from shore. The second plane was able to fly to Joint Base Andrews Maryland and land safely. A distress beacon from the downed pilot was used to locate him, and he was picked up in less than one hour. Both pilots belong to the 113th Wing D.C. Air National Guard.