Nevada Petroglyphs Oldest in the U.S. May Date Over 14,000 Years Old 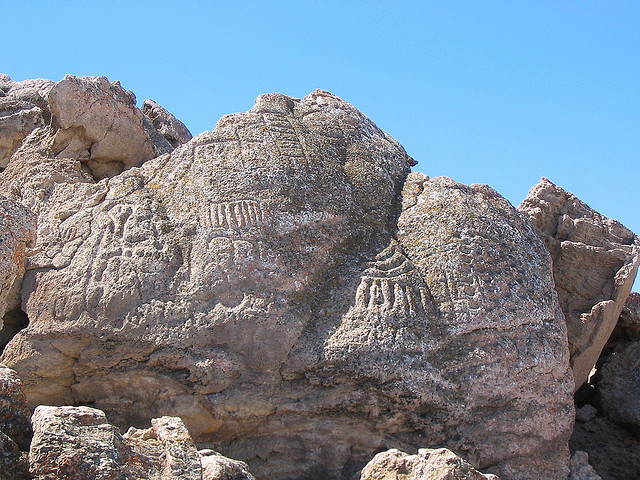 In Nevada, petroglyphs (rock etchings) have been discovered that may date back over 14,00 years ago. The petroglyphs were etched into the limestone rock there by Native Americans, but exactly who created the abstract drawings is so far unknown.

The amazing find was discovered along a dried-up river bed.The exact age of them has ywt to be fully determined, but researchers say they are at least 10,000 years old and may be as ancient as 14,800 years old.

Even at the earliest age, if they petroglyphs turn out to be just 10,000 years old, they still would be the oldest ones in North America.

What do the Nevada petroglyphs depict?

The petroglyphs near Pyramid Lake in Nevada resemble etchings that have been dated to 7,000 years ago at a lake in Oregon.

The drawings are abstract, and are of geometric designs. Some look like clustered diamonds, while others are made up of parallel lines, shorter ones on top of a longer one, like something from an I Ching book.

Though scientists can’t be sure who carved them, the etchings are on reservation land belonging to the Pyramid Lake Paiute Tribe.

The drawings and designs are definitely not primitive, according to Eugen Hattori, the curator of anthropology at the Nevada State Museum in Carson City:

We initially thought people 12,000 or 10,000 years ago were primitive, but their artistic expressions and technological expertise associated with these paints a much different picture.”

The geochemist who did the radiocarbon dating and co-authored the paper on them is Larry Benson, who was a research scientist for the the U.S. Geological Surveyand is now the curator of anthropology at the University of Colorado Natural History Museum in Boulder.

Researchers have suggested that the etchings represent a variety of things, ranging from clouds and lightning to perhaps symbolically depicting the Milky Way.

To Benson, the drawings are beautiful and are some of the best examples of native artwork in North America:

When I looked at it, I said, `These things are incredibly beautiful.’ We have so much beautiful, old Native American stuff in the United States, but this shows it didn’t necessarily get more interesting or more pretty with time.”

How was the radiocarbon dating done?

The radiocarbon dating that Benson performed on the etchings near Nevada’s now-dry Winnemucca Lake was done by first figuring out when the limestone boulders were above the water line. The lake was full of rocks at one time during its history. The rocks are now at an elevation of 3,960 feet, but at one time, they were submerged by the water of the lake.

The radiocarbon dating was used to determine the age of the carbonate left on the rocks by the waters of the now dry lake. Then, the date of sediment core samples was analyzed, and it was determined that the boulders were originally exposed to air between 14,800 and 13,200 years ago. They were next exposed somewhere between 11,300 and 10,500 years ago.

So, what is it that the Nevada petroglyphs represent? What’s the final verdict?

According to one of the researchers, “We don’t know.”

They are still pretty cool, though, and are proof that people in the U.S. were actively creating art longer ago that anyone had previously thought, possibly over 14,000 years ago.