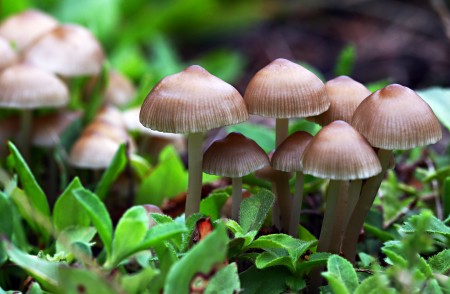 Continued research into psychedelics and their effects on the brain and mental states have new evidence showing promise that this may be the most effective treatment of stress related issues, such as Post Traumatic Stress Disorder (PTSD). Research shows that the active ingredient in psychedelic mushrooms (“shrooms”), psilocybin, reduces stress and stress related anxiety. There is also evidence that it stimulates new brain cell growth as well.

There have been a number of studies in the last few years looking at the effects of psilocybin in the brain with some interesting results.

In a study published in Proceeding of the National Academy of Sciences (PNAS) December 20, 2011, 30 healthy volunteers had psilocybin infused into their blood while inside magnetic resonance imaging (MRI) scanners, in order to measure the brain’s activity. In this study it was observed that major ‘hub’ centers of the brain, responsible for the continuity of our experience, were inhibited, allowing for a expansion of perception.

In a second study, published online by the British Journal of Psychiatry January 26, 2012, found that psilocybin enhanced volunteers’ recollection of personal memories. “Ratings of memory vividness and visual imagery were significantly higher after psilocybin (P<0.05) and there was a significant positive correlation between vividness and subjective well-being at follow-up (P<0.01),” according to the results of the study.

A third study, was published online by Lieber Institute for Brain Development, Baltimore, MD in August 2013. This study found that the use of psilocybin prompted neurogenesis (brain cell regeneration) in mice and repaired damage from fear inducing stimulus. This study shows particular promise to help treat PTSD, related disorders, and brain trauma.

The latest study from Baltimore, MD indicates that psilocybin stimulates new brain cell growth and can erases frightening memories. Mice conditioned to fear electric shock when hearing a noise associated with the shock “simply lost their fear,” says Dr. Juan Sanchez-Ramos, a co-author of the study. A small dose of psilocybin allowed them to overcome “fear conditioning” and the freeze response associated with it, faster than the group of mice on Ketanserin (a drug that counteracts the receptor that binds psilocybin in the brain) as well as a control group of saline.

According to PTSD Alliance, an estimated 5% of Americans – more than 13 million people – have PTSD at any given time. An estimated 70% of adults in the United States have experienced a traumatic event at least once in their lives, and up to 20% of those people go on to develop PTSD. An estimated 1 out of 10 women will get PTSD at some time in their lives as they are twice as more likely then men to develop the disorder. It could be in part to the fact that women tend to experience interpersonal violence (such as domestic violence, rape, or abuse) more than men.

It is quite possible that the use of psilocybin as a medication in conjunction with psychiatric treatment can heal the trauma that we experience preventing or healing PTSD. This could potentially be a great boon not just to our returning Veterans, but to rape victims, victims of domestic abuse, and those people with traumatic brain injuries.

As scientists and medical professionals continue to explore what this natural substance can really do for us, we may find psilocybin following marijuana as the next natural cure that we are fighting to make legal. Only time will tell how helpful this psychedelic substance will end up being for brain and mental trauma in the future, though for now, it is showing promise for the treatment of PTSD, a remarkable finding.

One Response to "Psychedelics Show Promise for PTSD Treatment"