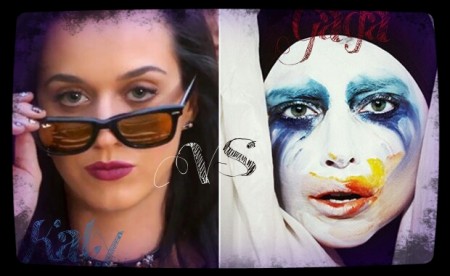 Katy Perry’s single Roar is certainly flying through the shelves, so to speak, even by passing her creative rival, Lady Gaga’s resent single Applause. Already its been revealed that Roar will topple 450,000 ‘copies’ in digital sales on iTunes, where Lady Gaga’s Applause will unfortunately be half that at 200-250,000. Its been made obvious which the audience prefers.

Nothing revives the drive to succeed more than a little healthy competition and these ladies know how to pull out all the stops. The Video Music Awards, August 25th, will be very exciting because both artists are going to give it everything they’ve got. For Katy Perry it will be to remain in the number one rank, for Gaga it will be to fight her way up the ranks after dropping to number four on the list. They will unquestionably be performances to remember.

Fans are swarming on both sides to defend their favorite artist, a writer from ‘DirectLyrics’ posed the question, if this was the end of Lady Gaga…had she been out shun? This question sparked a lot of controversial responses from the public on twitter, face book and even personal blogs. “Nothing is over for Gaga,” said charismatic fan Fabiano Manganaro.

“I think Katy has it in the bag, I mean her song is more a commercial route and also she is more likeable to a general audience,” says Andres Rodriguez, “Gaga doesn’t connect with a wider spectrum of people, the only ones she can really connect with are her hardcore die-hard fans. Yes the music isn’t bad but it’s not the most appealing either, that and she’s not very likeable.”

“Katy may sell more,” said another passionate fan, “But she’ll never be able to trump Gaga in a live performance.”

“Very good for Katy,” Stated a fan, “but the media needs to stop pitting people against each other, especially female artists.” He then went on to add, “START THE MUSIC, STOP THE DRAMA!”

Gaga just needs to keep her Poker face,” Katie P. offered her opinion with herself amused humor, “See what I did there?”Keep your eye out for the official Applause music video that will be shown on ‘Good Morning America’ Monday morning.