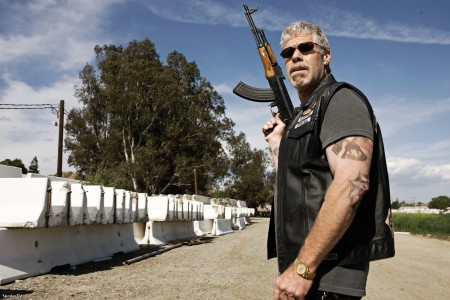 According to Sons of Anarchy creator Kurt Sutter season six will herald a change in the shows direction. From the look of the explosive teaser promo, it looks like the change might just be even more gritty and “grisly” than ever.

Sutter has said that the new season will be shocking, controversial, and include a storyline lifted straight from the newspapers. The creator revealed that he’s been playing around with the idea for three years and he now feels it’s time to put in the show.

The Sons of Anarchy season premiere promises to set the tone for the rest of the season, which fans know will contain lots of violence and gore. Sutter promises that, “I will also say that there’s a lot of blood and guts in my show… It’s a signature of the show, but I feel like I’m not lying to myself when I say this: Nothing is done gratuitously. The events that happen in the premiere are really the catalyst for the third act of this morality play we’re doing.”

But as the popular FX show nears it final two seasons. Kurt Sutter is already thinking of ways to extend the show’s mythology beyond its present state of finality. With the explosive new promo teaser trailer for Sons of Anarchy appearing to promise even more action in season six, fans will wonder just who will be left at the end of the penultimate season.

The Sons of Anarchy creator has said he already knows how the final season will end. Speaking at the Television Critics Association press tour at Beverly Hills, California, he said, “I have an idea of what the final shot is. I have a loose blueprint I go in every season with of big mile markers and I have a sense of where I want to begin and end. What I’ve learned over time is the looser I hold onto those ideas, the better the seasons are. So I tend to have a loose grip and my sense is that what I’ll do next season.”

Sutter said that he’s been talking with the FX Network about a Sons of Anarchy prequel that will look at the motorcycle clubs beginning in the 60s. He said, “There’s nothing official, but I’ve had conversations with the network about doing a prequel, in terms of being the formation of the club, the first nine members. In my mind, it would be a completely different show than this tonally. Obviously, it would be a period piece. It’s an interesting time in our history. And to follow these guys coming back from the war into society and ultimately the formation of this society is an interesting story to tell.”

FX chief John Landgraf is apparently intrigued by Sutter’s idea of a prequel. He said, “I think it would be really fun to do a period piece, basically set it in the aftermath of the Vietnam War, about the men that came back and their families and how the club was formed.”

The premise of this prequel is of founding members, John Teller, the father of Sons’ protagonist Jax and Piney Winston, who was killed by Clay Morrow earlier in the series. Sutter explains, “It would be those guys as kids, basically. It’s an idea we’re kicking around and we would never do it on the heels of this show. We would probably wait a couple of years and let the mythology breathe a little bit before we came back with something, but that’s the idea.”

But until the new series hits our television screens, the world of Anarchy could live on in other mediums. Novels, graphic novels and possibly “a gaming idea” are in the works. Studios are already in the process of launching a Sons of Anarchy graphic novel series.

“It will be parallel stories,” Sutter explains. “It won’t touch on any of the mythology we’ve created, but will have secondary characters that will intervene and cross through that and there will be story points for people that are really paying attention. There will be inter-secting narrative points but nothing that impacts or influences the mythology we’ve created. It will be definitely in our world.”

But until that series is born, we have the excitement of the Sons of Anarchy sixth season which will be roaring up on September 10 on Tuesday. To wet your whistle we’ve put the promo teaser trailer below. Be prepared for some slo-mo explosive action.