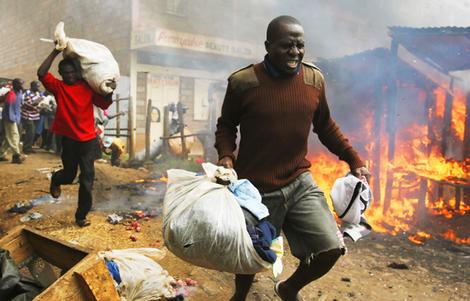 A new meta study connects rising world temperatures with aggressive acts of violence and even war.  The research has determined there to be a statistical relationship between the two phenomena.

Researchers analyzed 60 studies that have been done on the collapse of empires, wars in recent times, rates of violent crimes in the United States, experiments involving laboratory simulations testing the reactions of police officers to volatile situations, and even incidences of baseball pitchers aiming at batters.  The data presented for analysis included a dozen studies on the downfall of empires and dynasties, 15 on crime and aggression and more than 30 on wars, civil strife and other forms of contentiousness.

The conclusion was that there was an invariable nexus between extremes of hot and dry weather and violence over the centuries.

The study was conducted by a team of economists and was published online on Thursday in the journal Science.

The lead author of the study, economist Solomon Hsiang of the University of California, Berkeley, said that the meta study unearthed convincing evidence that climate can promote conflict.  Extremes of temperature and aridity incite us to inflict harm on others.

The researchers applied a formula correlating risks of various types of violence with a rise in temperature.  In those parts of equatorial Africa afflicted with disorder, every degree Fahrenheit of increase resulted in an 11 to 14 percent greater chance of rebellion, war, or civil unrest. In the United States, for every addition of 5.4 degrees there was a magnified likelihood of violent crime by 2 to 4 percent.

A separate paper published in Science on Thursday expressed the view that global averages will increase by some 3.6 degrees in the next half-century. This increases the odds of war in Africa by 40 to 50 percent, said Edward Miguel, another Berkeley economist and study co-author. Temperatures in much of North America and Eurasia are also likely to go up by 5.4 degrees by 2065 because of increases in carbon dioxide pollution

The burning of fossil fuels releases greenhouse gases, mainly carbon dioxide (CO2) and nitrous oxide (NO).  Greenhouse gases trap heat close to the Earth’s surface, so that the surface temperature of the Earth increases.  The U.S. Environmental Protection Agency and others estimate that the global temperature has increased 1.2 to 1.4 degrees Fahrenheit over the last 100 years and will continue to warm by 2 to 11.5 degrees over the next century.

Scientists have taken issue with the conclusions of the Berkeley studies.  Joshua Goldstein, a professor of international relations at American University, said that hotter temperature is only one of many factors in conflict.  He also found fault with the study’s methodology.  There is, he says, evidence indicating a long-term trend toward a decrease in violence.

Hsiang maintains that the link between temperature and conflict was consistent in every instance, and the statistical relationship between the two holds true.

It has already been determined that heat stress is the same as stress in terms of physical and emotional response.  Heat stress can lead to heat exhaustion.  The depletion of water and salt  due to heat exhaustion can progress to heat stroke, which can damage the brain and other vital organs, and may even cause death.

A study conducted in 2011 found that a loss of 1 percent body mass from sweating decreased cognitive performance and increased levels of anxiety. Dramatic overheating, the study found, can also lead to worsening symptoms progressing from confusion and irritability to hallucinations, violent behavior, and delirium.

The Santa Ana a hot, dusty, wind in southwestern California that blows westward through the canyons toward the coastal areas, is regarded as a seasonal cause of insanity and murder in crime fiction of the 1920s and 1930s.   One of the colorful nicknames for the wind is “devil’s breath.”

If the statistical correlation of heat and violence can be further verified, there are measures that can be taken to reduce the risks of war and devastation.

8 Responses to "Statistical Relationship Between Heat and Violence Found"