Suri Cruise Has a Break 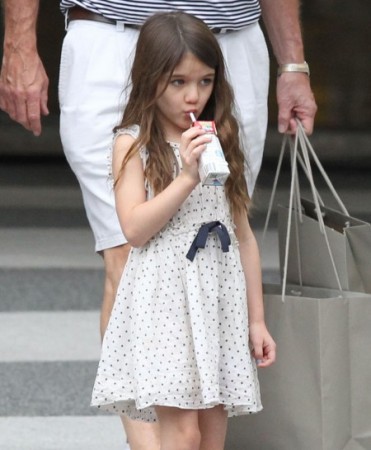 Little Suri Cruise has had pretty busy time of it lately. But it seems that she has had a break, and not the good kind. She reportedly broke her arm, although details are pretty sparse as to where and when this occurred.

Mother Katie Holmes’ rep confirmed the news that the 7 year-old daughter of Katie and Tom Cruise broke her arm, but there has been no further information made public. The rep said, “She did break her arm, but she is OK.”

Poor Suri has had a lot going on in her young life. First off in 2012, Katie and Suri were in their Mercedes near Chelsea Piers in New York when a garbage truck hit their vehicle. Apparently the truck backed into the car. Then in April this year, her parents got divorced and we won’t even go into the rude paparazzi who called her a brat.

Suri was recently spotted hanging out with her 34 year-old actress mother on the set of Miss Meadows at the Cleveland, Ohio filming location. She has been living with Katie after her mother won custody of Suri after her divorce from Tom Cruise.

It’s okay though, her 51 year-old movie star poppa has plenty of visitation rights and he spent some quality “father time” with Suri after her accident in 2012.

In fact, Suri only recently got back from a visit to the United Kingdom where she had a visit with daddy Cruise. Since Suri has become quite the little jet-setter, we don’t know where exactly she had her break. Hopefully her arm wasn’t injured while she was visited dad!

But if she did injure her arm while she was on her “break,” we don’t think that Katie will be holding it against Tom!

Not that it would make any difference to Katie, she made sure that part of her divorce settlement with Tom ensured that he would get plenty of time to be a father to their daughter, despite their own break. She makes sure that Suri knows who her father is.

A source close to the divorced couple told Us Weekly, “Katie wants to make sure the visits are in the context of him being a parent figure. He adores Suri, but now he’s afraid he won’t be able to have a close relationship with her.”

Since Tom rushed to be with his daughter after her traffic mishap last year, we don’t doubt that he has made time in his busy schedule to provide Suri with the support he feels she needs. It would be nice to think that Suri had both her parents with her while her broken arm was being put in a cast.

Apart from Suri’s broken arm making the news, so is her fashion sense. But while the media is making much of her choice of clothing and accessories, They seem to forget that at the age of 7, she makes a lot of her choices with mom Katie’s blessing. So we may have to wait for the Suri Cruise clothing line!

Not to mention that right now Suri is pretty preoccupied with her “break” and starting school. On top of that she is moving between each parental unit, so her life is pretty busy for an average 7 year-old. She also is still in the stage of adapting to her parents divorce.

So while Suri has a break, so to speak, we wait for further information on where and when she suffered her injury. Perhaps from climbing a tree with Pop in England?