Walter White and Breaking Bad Late to the Party 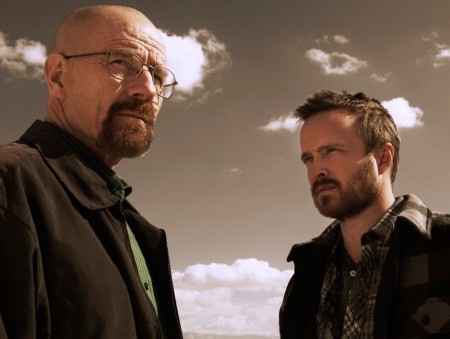 Living in the United Kingdom, I came late to the party of Walter White and the Breaking Bad verse. Watching the program was not high on any priority lists until the penny dropped that Bryan Cranston, who plays White, was Hal from Malcolm in the Middle. That knowledge made watching the show a sudden and immediate necessity.

Catching up to the point that the series is at now meant partaking in the Netflix pastime of back-to-back episode cramming. A sort of Breaking Bad 101. It helped to get an instant “feel” for the show and a more timely and less frustrating glimpse into how far Walter White disintegrates in his transformation from likable rogue to terrifying villain.

Vince Gilligan’s story of Walter White and Jesse Pinkman’s descent into “bad-ness” in Albuquerque, New Mexico is brilliant. His purpose of developing a show where the protagonist turns into the antagonist is as addictive as the blue meth, aka Blue Sky, that the two main characters make in the show.

Watching Jesse and Walter evolve as the show’s seasons progressed was an exercise in brilliance. Seeing just how far the ripples of the two men’s meth production affected everyone in their lives kept me coming back again and again to see where this was going to end. And to see who it was going to destroy.

The story of Walter White and Breaking Bad is one that, despite my joining the party late, keeps me transfixed. I am in that place where one part of me wants the show to keep going and yet another wants it to tell me what happens.

The characters are all fascinating, even Lydia; who had no trouble ordering the deaths of several “problems” but who could not look at their remains as she left the scene of the crime. Hank with his irresolute morality and hidden trauma from El Paso; Maria with her shoplifting; Walter with his cancer and illegal money generation that was to be all about providing for his family in the beginning; Jesse with his drug use and lack of focus and Skyer with her final doomed acceptance of everything that Walter has done.

It seems prophetic that Sunday’s episode included Walter taping another video confession. Something he did in the series pilot episode when he thought it was all over. Only this time his confession is a “set up” to stop his brother-in-law Hank from pursuing him any further.

Last night’s episode, entitled Confessions was all about confession, including Walter’s fake one and, in one instance, the lack of of one.

Gilligan keeps taking us further and deeper into the convoluted mess that is Walter’s mind and we marvel at just how far he is willing to go in terms of maintaining his little empire. It isn’t just about his actions though. The scene in the car wash where Skyler is sitting in the office is beautifully set up. Walter comes in to remind her that he has chemo and he needs her to take over the till while he is gone.

Throughout the entire short scene Walter is in the shadow; an obvious allusion to the fact that his character is getting even darker. We who have been along for the ride are not surprised at all. We have watched as Walter has changed from the “well meaning” criminal at the beginning to the master manipulator who will not hesitate to do anything to ensure he succeeds.

When he is with Jesse out in the desert was there anyone who did not truly believe that Walter wasn’t there to silence his former partner forever? It seemed almost fait accompli that when Walter went to hug Jesse that he was going to shoot him point blank or stab him.

From the way that the program ended, it looks as though Walter might have been better off if he had killed Jesse in the desert. On top of the fact that it looks like Jesse has blown a gasket after realizing just how badly his ex-partner has treated him, you have Todd who looks to be an added problem. He and Lydia have obviously joined forces and his returning to New Mexico with the tank of methylamine spells trouble.

I may have come late to the Breaking Bad party, but like the most irritating guests, I plan on sticking until the very end. I’ll have to in order to see what that teaser is all about at the beginning of the season five episodes. Will Walter White scream out “Say hello to my little friend?” with his new toy. And what happened to his house with Skyler, Walt Junior, and baby Holly? So many questions and so few episodes left to provide answers.