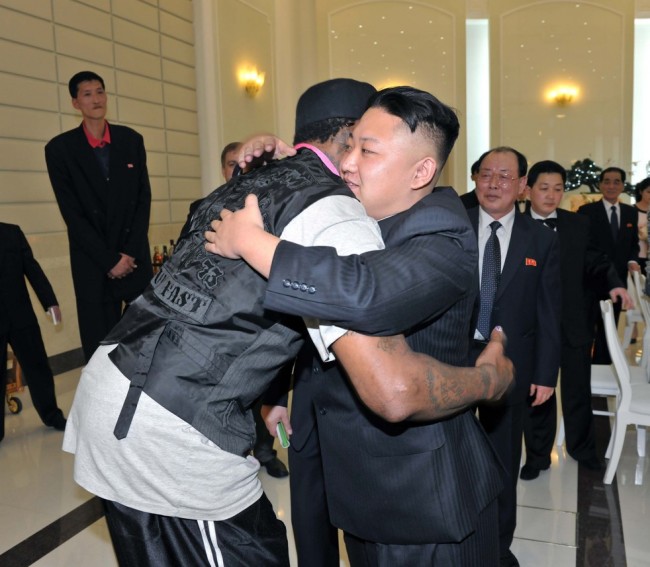 With the crisis in Syria another important issue was almost forgotten: North Korea. While there is still a debate going on about the use of chemical weaponry in Syria, nobody questions the nuclear weapon of North Korea. They tested it few times, and unlike Syria, these tests can be confirmed quite certainly with the help of seismological analysis. Many attempts were done to solve this problem for many years, but in vain. Suddenly we have a new peacemaker: Dennis Rodman.  Can Dennis Rodman help open Obama’s mind?

Dennis Rodman is a legend. He won five NBA champion titles: firstly with the Detroit Pistons, and later with the Chicago Bulls. His trade mark was his extremely successful score with rebounds: he is one of the best in NBA history and somebody can even call him the best. However, Dennis Rodman made his name in showbiz style behavior.

His drunk marriage with the “Playboy” star Carmen Electra was one of these steps. It was almost like in the “Hangover” movie when both Dennis Rodman and Carmen Electra discovered that they got married. Dressing into a women’s dress was also an extremely good move. This episode penetrated mass culture and was used in many movies: in “Bedazzled”, for example, or “Miss Congeniality.” Remember the words said to Sandra Bullock’s heroine: “When I met you, Dennis Rodman looked better in a dress”?

Dennis Rodman’s trip to North Korea is in the same category as his drunk marriage and extravagant behavior – it is all a showbiz putting him in the center of the world’s attention.

It is understandable why Dennis Rodman was willing to visit North Korea, but why did the North Korean dictator want to see him? Of course, we can assume that Kim Jong-Un is truly in love with basketball as much as his dad was. But there is also one old tradition for dictators all over the world – to have famous people around them.

The idea is simple – to create a better image of themselves. Probably the most famous examples are Leni Riefenstahl with her “Triumph of the Will” praising Nazis Germany or Lion Feuchtwanger with his naïve “Moscau 1937” about Stalin’s Russia at the peak of political terror. One of the latest examples includes granting Russian citizenship to French Girard Depardieu. If the Russian president can have a famous French actor, why can’t the North Korean president host an American star? Actually he can not. The name of the Eternal President of North Korea is still Kim Il-Sung. Yes, he died in 1994, but he still leads the country from his grave! Kim Jong-Un just a “leader of the country,” and now he is the best friend of Dennis Rodman.

Did Dennis Rodman notice Stalin era prison camps in North Korea? No, just like Leni Riefenstahl and Lion Feuchtwanger. Girard Depardieu can consider himself a friend of Vladimir Putin, but according to a new Russian law he should be in prison! A few years ago Girard Depardieu played a closet gay, which in terms of the new Russian law, can be considered as “gay propaganda.”  Instead, Depardieu received a new apartment in city Saransk not far from a prison camp where one of the “Pussy Riot” band members is jailed for singing “Holy Mary, let Putin go!”

Now Dennis Rodman is advising Barak Obama and others “to open their minds” to North Korean leaders. OK. Let us try.

North Korean propaganda depicts Americans as non-human monsters, so let them see real Americans. However, I do not want to “open my mind” Dennis Rodman’s way. Kim Jong-Un’s former girlfriend was executed by a machine gun in the presence of her family which was later sent to an imprisonment camp. The reason for such execution was supposed “pornography” she was making.

If the dance performed by these girls is a “pornography” then Carmen Electra, the former wife of Dennis Rodman, would be probably hanged, quartered with her head cut off by one of North Korean’s ballistic missiles for her crimes. Dennis Rodman should remember about this as well as about thousands and thousands in labor camps, as well as two million North Koreans who died from starvation due to the brilliant leadership of his new friend. But probably it is good that Kim Jong-Un has a friend like Dennis Rodman. One day the North Korean dictator can found himself in Las Vegas after a heavy hangover just to find out that last night he married Miley Cyrus!

Can Dennis Rodman open Obama’s mind about anything?  We can only speculate, and wait to see.