Child Abuse in Nearly Every Home in America? 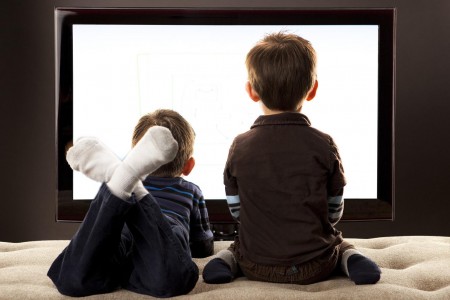 A strong statement for sure. But is it true? Is nearly every home in America providing an abusive atmosphere to their youngsters by allowing unmonitored television viewing to become ‘the norm?’ Many parents are going to be up in arms at this last statement, but before you jump on the comments just yet, let me admit that I too am at some level at fault for using the television as a baby sitter of sorts over the years. Child abuse can take many forms. Studies are revealing how extremely high levels of television watching, especially in children under 6 years old, could fall into the category of abuse. How so?

Think back to a time before television, when wood toys and imagination were king. Many of us today have no reference point to an era before electronics, but let’s use our creative minds to imagine what life was like before television was an option. See children sitting on parent’s laps hearing stories of times past. Watch the little ones invent toys out of shoe boxes and string or collect bugs in an old peanut butter jar. Today’s children seem to lack these inherent creative qualities when they spend too much time in front of the old electronic box. The nice thing is, it doesn’t take long, when this device is removed, for the good old imagination to re-emerge.

According to The Sourcebook For Teaching Science by by Norman Herr Ph.D., parents spend, on average, 3.5 minutes of meaningful interaction with their children per week.  Some classify emotional abuse as a coldness, an inattentiveness to a child’s needs.  Would spending only three and a half minutes connecting with your child per week fall into the category of ‘coldness?’  Seems like it might.

Now don’t get me wrong, this type of abuse may not be intentional, in fact, usually and in most cases, it is not.  Parents are just trying to get things done, finish work, cook dinner, make a phone call, accomplish some shred of what we would like to call our ‘duties’, while at the same time neglecting the very beings who we claim to be doing all of this for.

As a parent who tries not to stick my kid in front of a television program very often, I still struggle as he begs for my attention while I have articles to write, dinner to cook and a nap to take from being so tired at 7 months pregnant.  I try to encourage him to find something creative to do that does not entail staring at a screen.  I know as much as anyone else, this is not easy.

Did you know that according to stats, 54% of 4-6 year olds would rather watch a television show than spend time with their dads?  Is this for real?  Would these numbers exist if parents were spending quality time with their kids on a regular basis?  Are children bonding to the television instead of to their folks?  Reports have shown that excessive television watching – such as the 35 hours plus per week most youngsters engage in – contributes to attention deficit disorder, obesity and violent behavior.  Children who watch a lot of t.v. may have a more difficult time interacting with other kids, be prone to health problems and experience a stunt in cognitive growth.

What could cause all of these problems?  It certainly isn’t the television’s fault, it’s an inanimate object.

Kids spend, on average, 900 hours in school per year and over 1500 hours watching television.  In the eyes of some, this might be considered child abuse, happening in nearly every home in America every year.  66% of Americans have the television on during dinner time, taking away from valuable family communication and interaction time.  Even learning shows still do not allow for certain functions of the brain to activate, leaving one crippled in the imagination and stopped in the tongue.

True, some kids get inspired by shows and then sit down with their toys to create something.  Not all television experiences are negative and not all parents simply use the t.v. as an absent parent sitter.  The statistics are frighteningly high for kids and television.  It has to make a person who is consciously observing the scene, as if visiting from another planet, wonder is this child abuse taking place in nearly every home in America?  Is time spent in front of the t.v. in over half of the homes in the US a substitute (and a poor one) for quality interaction and connection?  Is the answer as simple as turning the t.v. off and finding out what else is possible?  It is very well this simple.  Only you will know by removing television from your home.  Try it for a few weeks and see what happens.  Withdrawal may happen at first, but then, something miraculous may occur for everyone in the house – and you may find yourself wondering why the television had ever been so greatly used before.  Perhaps what was before unintentional abuse will turn into a lasting bond that makes all those shows seem more of a nuisance than a savior.