Cory Booker – What’s Up with a Vegan Strip Club? 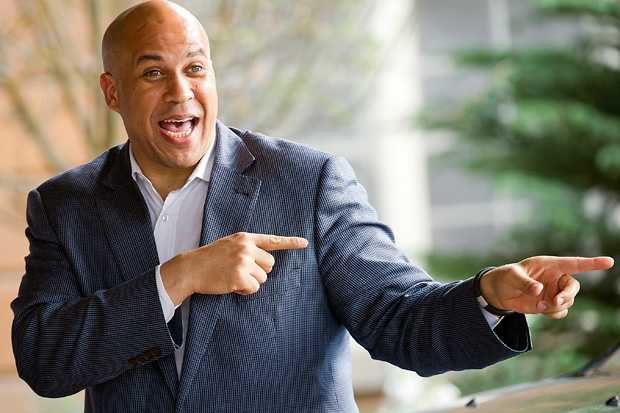 So, here’s one for the ‘Strangest Combinations’ file, a vegan strip club. Who would have thought of pairing the vegan philosophy of animal rights and compassionate living with naked girls? Portland, Oregon, club owner, Johnny Diablo, would and did just that. The strip club is beginning to get some national attention due to the uncovering of tweets between one of the club’s dancers and Mayor Corry Booker, which also begs the question, what’s up with a vegan strip club?

As far as everyone knows, Booker, a candidate for the U. S. Senate, is not vegan. But, recent tweets were uncovered between the Mayor and stripper, Lynsie Lee, who dances at the only vegan strip club in America, Casa Diablo. In his humorous video, Kumail Tours Portlandia, cast member of the kooky television series Portlandia, Kumail Nanjiani, stops by the club during the tour and takes viewers inside. He readily admits this is his first time setting foot in a strip club.

Why a vegan strip club? Diablo, who has been a vegan for 28 years, explains, “Portland is the vegan capital of the U.S. Portland is also the strip club capital of the U.S. Why not put them together and have the best thing ever.” At what could be the world’s first vegan strip club, the exotic dancers are not required to be vegan and not all of them are, but Diablo will readily admit that he tries to educate them and his goal is to convert everyone who is not vegan from being “flesh eaters to a more compassionate way of life.” In fact, the dancers are not allowed to wear leather, silk wool or feathers on stage or bring non-vegan food products into the club.

The menu consists of all vegan fare. There is the expected rice bowls and wraps, but diners can also enjoy more traditional bar food, such as sloppy Joe’s, mac and cheese, and chimichangas.  Casa Diablo also serves a wide variety of flame-grilled veggie burgers. The club has its own recipe for its chips and chili. Chef Justin’s favorite dish to prepare is the nachos, explaining, “I can make it look pretty with all the veggies, cheeses, and sauces and all the colors.”  According to Diablo, “We have the sexiest nacho eaters here.” To prove it, dancer, Moxie, gives Nanjiani a lesson on how to make eating nachos look sexy. Good food, friendly staff, and sexy women all in one place, that is what’s up with a vegan strip club.

As for the dancers, in particular Booker’s Lyndsie Lee, who is not listed among the dancers featured on the website, they perform in the nude. When asked by Nanjiani, what it’s like to watch naked women dancing while preparing the food, Chef Justin replied, “It’s just normal life to me right now.” Nanjiani admits to being nervous while watching them. “I’ve never seen so many vaginas in one day,” he said.

Nanjiani jokes that Casa Diablo is the perfect place for someone who says, “I want to see naked women and get vegan food and I don’t have time to make two stops.” The online reviews are good, with comments such as, “Food, good and cheap,” “Girls with good talent,” and “Most fun I’ve had for $10 at a strip club.” As for Mayor Cory Booker, what’s up with a vegan strip club besides Lynsie Lee, may be an interesting way for a bunch of carnivores to learn about compassionate living.

One Response to "Cory Booker – What’s Up with a Vegan Strip Club?"