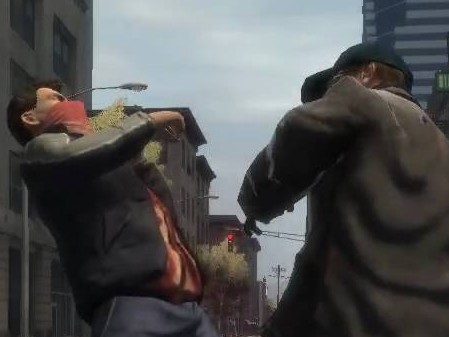 Allegations that playing violent video games such as Grand Theft Auto V increases the player’s tendency to commit violent acts continue. While the jury is still out on that debate, it does seem that purchasing GTA 5 can cause violence to erupt as captured in this Instagram video. Two families fight for the last copy of the game in Walmart and the battle rages on though the store and out into the entrance. We have the video down below so you can see the fracas in all its glory.

The video was posted on YouTube today, via Instagram and it has garnered well over 2,000 views. The fight starts as a verbal altercation that quickly escalates into a real donnybrook of a fight. It appears to be a disagreement between two different families over who should get the game.

As the two groups of people become more agitated, the violence increases as blood pressures rise. The father of one teenager tells the young black man who wanted to purchase the last game as well, that he should “calm down” or he would get his “A**” knocked out.

The father then goes on to say that nobody talks to his son that way. After asking if the black man is high or on something, he starts trying to take the younger man to the floor. As this occurs, two more teenage males get involved in the scuffle as well as a young woman who attempts to pull the fighters apart.

The fact that violence erupted between the two families because they both wanted to buy the last GTA 5 game in Walmart seems to indicate that purchasing the violent criminally based video game is perhaps worse than actually playing it.

It looks as though everyone involved needs to find some sort of outlet for all that aggression and anger that both parties appear to have in overabundance.

While filming the action, a woman shouts that they need to call 911. The father gets knocked down to the floor and a teenager wearing a black ball cap and black and white shorts jumps into the fray and punches the black man in the face.

Amazingly, the store seems to be deserted except for this small group of violent consumers. With the females of the group trying to get all the fighters to stop and the males all attempting to get a “piece of the action” it looks more like a small riot than a fight.

As he attempts to pull himself together, the father and his two sons start to leave the Walmart store. The black teen then tries to leave and once he enters the exit, the fight begins again. He gets trapped against a vending machine by the father and his sons.

A woman again attempts to pull the young man being punched away from the fight and the black teen gets knocked into a row of shopping trolleys. At that point a man in a blue shirt and tan shorts tells the punching teenager to leave the other man alone and for him to get out of the store.

It is somewhat ironic that GTA 5, which is being blamed for causing violent outbursts from players of the game, has actually initiated a violent eruption between two potential consumers. The two families fighting in Walmart for the last copy of the game does not present a pretty picture of gamers to the rest of the world. But considering the existing violence and aggression of the potential GTA game players, it would seem that the violence of the game would not affect them very much. You can see the fight families in the video below.