How Did Ted Cruz Avoid Going to the Bathroom During His Filibuster? [Video]

By Nancy Schimelpfening on September 25, 20133 Comments 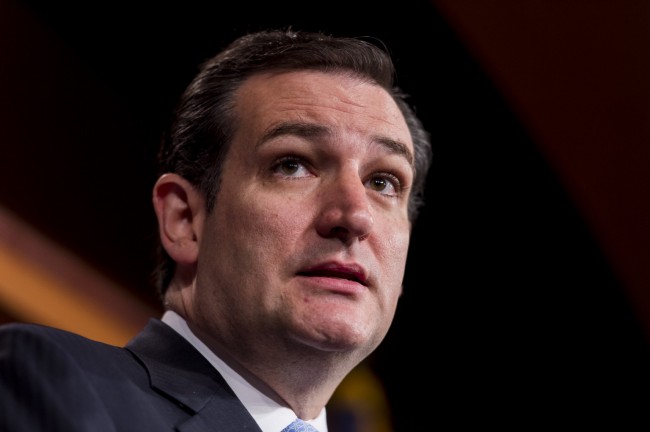 After Ted Cruz went for more than 21 hours on the Senate floor speaking against funding President Obama’s Affordable Care Act (ACA), the question on many people’s minds was this:  How did he avoid going to the bathroom during his faux filibuster?

Senate rules do not allow bathroom breaks.  In fact, during a filibuster, senators cannot leave the Senate floor at all, nor can they sit down.  The only time they can stop is to yield briefly to their colleagues for questions.

One way that like-minded senators have often showed their support for a filibuster is by purposely asking questions which are really just long-winded statements intended to give the person who has been speaking a break.  In fact, speeches given during filibusters don’t have to remain on topic at all, as Ted Cruz illustrated with his reading of Dr. Seuss’ children’s book, Green Eggs and Ham.

But, what about when nature calls during a filibuster?  Politicians have come up quite a few creative solutions for going to the bathroom over the years.  Maybe Ted Cruz took a few tips from these enterprising individuals?

Strom Thurmond, who in 1957 filibustered for a full 24 hours against civil rights legislation, solved the problem by having his aides set up a bucket in the cloakroom where he could urinate with one foot still technically on the Senate floor.  Thurmond also reportedly took steam baths days ahead of planned filibusters so that he could dehydrate himself.

In  1977, Bill Meier, who was at the time a Texas senator, conducted a 43-hour filibuster over a bill that he believed was an attack on open record laws.  To get around having to take a break to relieve himself, he used an “astronaut bag.”  It is said that when the bag needed emptying, Lt. Governor Bill Hobby would take a message from the House so that Meier could run to the lady’s room, which was nearest to his desk, to dump the bag’s contents in the toilet.  Two sergeants-at-arms followed him to make certain that he never sat down.

A St. Louis Alderwoman named Irene Smith was a little less subtle when she filibustered a City Hall debate in 2001 to protest a redistricting plan which she felt would hurt the city’s black population.  She had a sheet, quilt and a table cloth held up to shield her while she urinated in a trash can.  She was later charged, but never convicted, of violating a law against public urination.   A video of Smith’s gutsy move can be found below this article.

More recently, when Rand Paul did his 13 hour filibuster back in March, he had to jokingly admit that nature would not allow him to continue any further.

However, Wendy Davis, a Democratic state senator from Texas, had a more high tech solution when she did her 11 hour filibuster of abortion legislation earlier this year:  she used a catheter.

So, how did Ted Cruz avoid going to the bathroom during his filibuster?  While it’s obvious that he must have come up with some sort of solution to this dilemma, no one has yet come out and said what it was.

3 Responses to "How Did Ted Cruz Avoid Going to the Bathroom During His Filibuster? [Video]"