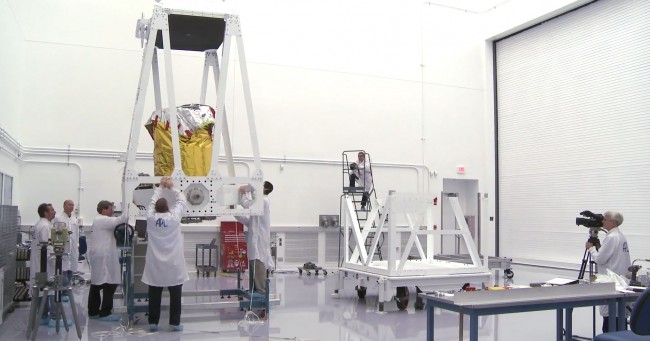 NASA is due to deploy a behemoth-sized balloon to study the highly anticipated Comet ISON (C/2012 S1), which is due to make its, hopefully, spectacular appearance across our skies in the coming months.

The enormous balloon is made from polyethylene film, and will be filled with helium to enable its ascension. The balloon will sport an aluminum-framed gondola, capable of carrying up to 3,600 kilograms, representing the weight of several small cars.

Using the zero-pressure balloon, the NASA team can fly their instruments close to 23 miles above the Earth’s surface. This enables the scientists to overcome the obstacles that atmospheric interference imposes, and should enable a much clearer picture of Comet ISON.

NASA’s Balloon Rapid Response for Comet ISON (BRRISON) gondola will be launched from the Scientific Balloon Facility in Fort Sumner, New Mexico, and was manufactured and managed by John Hopkins University Applied Physics Laboratory. The mission will only last the duration of a day, with the balloon carrying infrared and near-UV/visible imaging equipment, alongside a 0.8-meter telescope.

The BRRISON team have performed a series of pointing tests, suspending the gondola from a crane and using its instruments to obtain shots of distant planets and star fields, through the open doors of a hangar.

One of the BRRISON team members, Eliot Young, who works at the Southwest Research Institute in Boulder, Colorado, recently stated that the team wanted to test the stability of a hanging telescope “… at the sub-arc second level in order to take advantage of the near-space seeing conditions at 120,000 feet.“

Speaking to Space.com, Young indicated the Altazimuth (ALT/AZ) motors were able to retain a test source within a given field of view, by precisely adjusting the horizontal and vertical directions of the gondola.

Comet ISON is an Oort cloud comet, meaning that it originates from a giant cloud of icy planetesimals, situated nearly a light year from the Sun. The existence of the Oort cloud was theorized by a Dutch astronomer, called Jan Oort, and is believed to comprise of remnants of our solar system’s formation, some four billion years ago.

It is suggested that Comet ISON is traversing our inner solar system for the very first time, and is projected to pass extremely close by the Sun on Nov. 28. The comet is defined as a sungrazer, and passes very close to the Sun at perihelion. Whilst some substantial sungrazers can endure the punishing conditions at perihelion, many do not survive the journey and simply evaporate. It is highly probable, however, that ISON will be fragmented by the strong tidal forces of the powerful star.

BRRISON will monitor ISON before making its loop around the sun. These data will then be recorded aboard the balloon, and will be subsequently analyzed after making a successful return landing.

Andy Cheng, BRRISON principal investigator, indicates BRRISON’s primary mission objective to involve analysis of the constituents within the comet. Cheng maintains that it is plausible that both water and organic chemicals may have contributed towards evolution of life on our planet and, therefore, the importance of studying celestial bodies remains

It is hoped that the BRRISON initiative will also contribute towards furthering our understanding of the chemical processes that result in the evolution of intricate organic molecules in locations of planet and star formation. Alongside this, it could allude to the process by which Earth acquired water, as well as the compositional differences between Oort cloud comets and Kuiper Belt comets.

NASA’s BRRISON mission is slated for launch at 8 p.m. ET, Sept. 28, assuming weather conditions are permitting. The behemoth balloon is alleged to expand to the size of a football field when fully operational and, at the very latest, is expected to perform its comet ISON studies sometime this weekend.

UPDATE: The team that built the UVVIS instrument for the balloon (DayStar Engineering) have more information on their website, including a livestream link for the launch event. Check out the link for details: