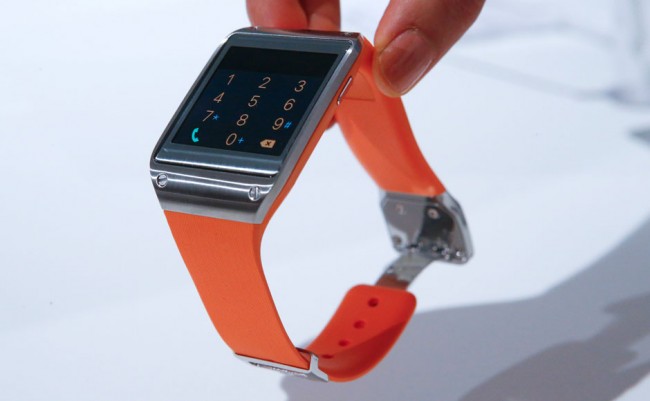 September 25 is the day consumers can hit retailers for the Galaxy Gear smartwatch. This watch will be able to sync with the Galaxy Note 3 and the Galaxy Note 10.1 tablet; meaning if a consumer doesn’t already own one of those two devices, the watch is useless, which is the case for millions of consumers. Buyers don’t want to be coerced into a package buy to enjoy the benefits of one product. At the IFA event, it seemed the audience wasn’t quite enraptured, either. The specs, nevertheless are pretty neat:

The build of the Galaxy Gear is appealing; the 2-megapixel is actually pretty sharp. The syncing aspect is very simple as displayed in the video. The Galaxy Note 3 is like a remote control which allows users to the change settings on the Galaxy Gear. Now, let’s move onto the more important aspects of the new device.

Samsung out-beat its competitor Apple on releasing the enhanced watch. The iWatch was delayed due to engineering issues, and currently Apple has not given any indication thus far on the release date of the device. The Galaxy Watch is a fantastic gift idea for someone who already owns the tablet and Note 3. Sales are expected to take off for the dual gift purchase.

The tiles on the Galaxy Gear seem reminiscent of another mobile manufacturer. The white font, larger than life tiles and colors are effectively seen on Windows phones. Nokia/Windows phones are notorious for colors like Lime Green, Blue, Yellow and more, whereas Samsung has always remained more conservative on color choices. The Galaxy Gear seems a cry away from the norm.

The initial response was lukewarm at the IFA event. It does leave many to wonder what the market will be for the smartwatch. The new wearable device will be released before Google Glass. This a great intro for the industry- granted Sony has announced their Sony SmartWatch 2 which is also ready for release later this month.

Upon the release of both of these devices, it will be interesting to see how they match up. Opinions and thoughts will be ongoing when it comes to the newest Galaxy Gear smartwatch as specs are measured and the audience for the device discovers if there is more to it than what meets the eye.