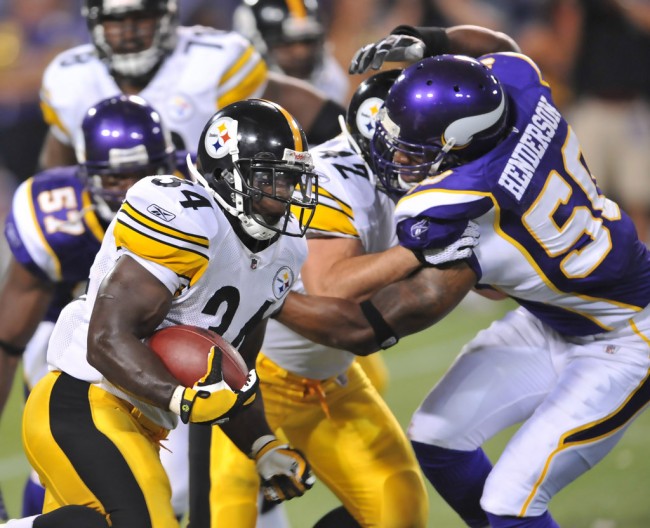 The NFL’s effort to establish American football in the hearts of Europeans gets its latest installment Sunday Sept. 29 when the Pittsburgh Steelers and the Minnesota Vikings meet in London’s Wembley Arena.  Both teams are 0-3 going into Week 4 of the 2013 season, and changes are on the horizon for both clubs.

On this uncharacteristic losing streak, Steelers quarterback Ben Roethlisberger fumbled twice and threw two interceptions against the Chicago Bears last Sunday.  After an ego-bruising route of 40-23 Steelers coach Mike Tomlin said, “I expect Ben to be better [sic] we’re going to work on that.” Roethlisberger showed moments of his customary genius for escaping sacks and pinpoint accuracy, but his sporadic play this season is a dark cloud over the team that they are all eager to clear.  The offensive line is not even close to the Steelers long legacy of dominance at the line of scrimmage and the running game is almost not there.

Despite safety Troy Polamalu’s efforts, the Steeler defense is the only one in the league that has yet to create even one turnover. Collectively the team has lost the ball a record nine times this season, an appalling stat for one of the NFL’s predominant teams.

Fixes for whatever is broken in Pittsburgh appear to be in the works. Coach Tomlin is keeping the team at home until Thursday, providing a measure of normalcy in this world gone wrong. It remains to be seen whether or not the Pittsburgh Steelers can get out of this season’s slump and start racking up some wins.

As for the Minnesota Vikings, this season marks the second time in the last three that they have started 0-3. However, after a strong 4-game winning streak to end last season, fans are not quite ready to jump ship.

Quarterback Christian Ponder suffered a broken rib in the Week 3 loss to the Cleveland Browns.  His injury gives Coach Leslie Frazier grounds to send in former Kansas City Chiefs quarterback Matt Cassel in his place. One cannot say whether or not this change to the lineup will actually be beneficial to the 0-3 club, as Cassel’s time with KC was not as rosy as it could have been. Last season, Cassel had the worst passer rating of the league at 66.7. He played nine games with the Chiefs, throwing only six touchdowns which are heavily overshadowed by 12 interceptions.

The matchup in London will be Cassel’s first start of the year and he is going into the game with confidence. “I feel like I’m ready to go,” he says.  Considering the outcome of Ponder’s first three games, Cassel may be just what the Vikings need to turn the corner and find themselves back on the winning side of the fence. He is liked by Vikings fans, and seems to have the support of the team.

Dynamic running back Adrian Peterson, a fantasy football favorite, started the season with a 78-yard touchdown run, but has only seen an average of 2.9 yards per carry since. He may be one of many to benefit from the change in leadership, however temporary it may be. The last time the Viking faced the Steelers, Pittsburgh’s defense held Peterson to a disappointing 69 yards on 18 carries.

If Cassel can show his stuff on Sunday he may secure a more permanent place in the starting lineup. Ponder’s current ranking of 30th in the league (passer rating 65.9) has not endeared him to Vikings fans. The outcome this Sunday may be the deciding factor in whether or not Cassel bows out once Ponder is healthy.

For Vikings and Steelers fans, the game in London will be a nail-biter. Someone will come away from the game no longer 0-3, and the other, despite adjustments and game plan corrections, will fall to a dreaded 0-4.

NFL.com: 7 Things To Watch For