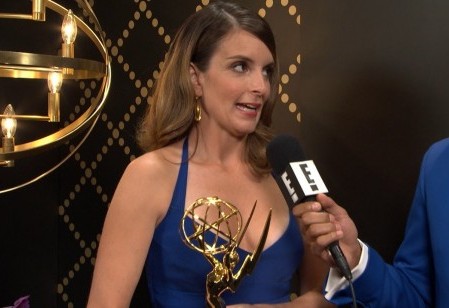 This has been Tina Fey’s year. First she will guest host on the new season premiere of Saturday Night Live; then she won an Emmy for Best Comedy Writing, along with her writing partner Tracey Wigfield. And it has been confirmed that Tina and and Amy Poehler will host the next Golden Globes. But on Sunday night at the Emmys Tina Fey had a wardrobe malfunction when one naughty nipple peeked out from one of her own golden “globes.”

Funnily enough, the 43 year-old actress, comedian, writer and producer, had just finished telling the Emmys host Neil Patrick Harris to take his trousers off and twerk onstage. While her nipple slipping into view could be seen as karmic in nature, it was actually hard to see when it happened.

Unless you were right up on top of your television screen, the split second slip, was easily missed. But Tina is in good company and her wardrobe malfunction was a bit tamer than Eva Longoria’s. At the Cannes Film Festival, Eva revealed that she was wearing nothing over her nether regions when she pulled her dress up to avoid getting the hem wet.

Other notable “slips” came from Kate Upton and Sofia Vergara also had a malfunction at this year’s Emmys. But Sofia didn’t have any of her anatomy peek out. Although she did have a more dramatic wardrobe accident at the 2012 Emmys ceremony when the seat of her dress split!

When Tina Fey and writing partner Tracey Wigfield come onstage to accept their award, Tracey gave her acceptance speech first. Tina stood to one side and waiting for her to finish. It was when she reached for the statuette to give her thank you’s that the loose fabric gaped enough for one nipple to have a naughty peek from her right golden globe.

But Tina took the whole thing in her stride as she continued her speech. But as we mentioned above, she is not alone in the female celebrity world of embarrassing wardrobe moments. Jennifer Lopez had her nipple pop out at the 2012 Oscars.

Mariah Carey’s top dropped down that little bit too far in February this year and one of her nipples came up to say hello. And of course who can forget Janet Jackson’s nipple slip that incensed television viewers while she performed at the 2010 Super Bowl at halftime.

Before Fey had her misfortune, she spoke to Ryan Seacrest about the fact that she, and Poehler, had been invited to come back and host the next Golden Globes ceremony. The next one will be in 2014 and Tina cued Ryan to ask Amy Poehler about it if he had not already done so. She and Amy had the audience in the palm of their hands when they hosted the 2013 event.

There had been a lot of speculation as to whether the two would be asked back. After learning that this year’s Golden Globes award event had a 17 percent increase in ratings when the two co-hosted, it became not a question of if they would return, but when.

Since the next ceremony is in 2014, Tina Fey should have plenty of time to learn from her experience and invest in some “tit-tape.” The tape that keeps your naughty nipples from peeking out from your personal golden globes! We have included the video clip of Tina’s little split second “slip up.” That way she will continue to get laughs for all the right reasons!