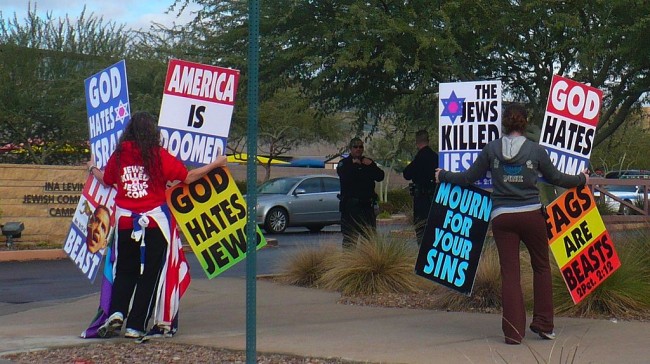 No matter your political or religious beliefs; no matter the color of your skin, or sex of your partner, one commonality that ties almost every one of us together is our antipathy for the quasi-religious organization, Westboro Baptist Church.  Fred Phelps, the founding father of this flock of evildoers, has been publicly protesting the world with his asinine beliefs, misplaced anger, and incredulous misinterpretations of the Bible since 1991. His home, which is where the members congregate, is the antithesis of a House of God, but rather the theoretical home of the anti-Christ.  The group, primarily known for its hatred of homosexuals, has also become notorious for picketing the funerals of soldiers and victims of mass attacks. Fred Phelps and his following, which as of 2012 consisted of a reported 40 persons, line street corners, parking lots, and any public area guaranteed to make them the center of attention. What they try to make us believe is that they are on a mission from God, but the truth seems to be found more in the pockets of the leaders. Garnering radicals, gaining notoriety, and publicly shaming anyone who will give them the biggest audience, is what clears a direct path to the bank of Fred Phelps- but that’s just my take.

Americans have maintained a continuity of protection at each event attended by the Phelps family, and a unity between all lifestyles has proven more powerful than anything Westboro and its followers could do. Bikers, same-sex couples, Christians, Atheists, armed forces, and even the KKK have all shown up to protect families of those targeted by these contemptuous evildoers. While trying to tear the fabric of a country, it seems their actions have had a righteous effect more than a negative. With each new protest, a new, unexpected twist arises.

In April of this year, at the memorial service for the victims of the Boston Marathon bombing, a group of nearly 1,000 local supporters showed up wearing black to form a human wall to thwart the protest efforts of Westboro Baptist Church. In May, following the deadly tornadoes that hit Oklahoma, Westboro Baptist Church made plans to stand in unison at the funerals of nine children who were killed by the tornadoes.  When their plans were made known to the public, a biker group known as Patriot Guard Riders, showed up to protect the families of the victims, and though the church members were a no-show, the camaraderie and level of togetherness was overwhelming.

Probably the most disturbing and shocking of these protests came in December of 2012 when Shirley Phelps (Fred Phelps’ daughter) announced she and her group would be picketing the funerals of the Sandy Hook children. In an odd, almost surreal turn of events, the Ku Klux Klan showed up to counter-protest the small but loud Shirley Phelps and friends. In what seemed like two ends of a spectrum, something miraculous occurred. The victims’ families shook hands with the proud Grand Wizard of the KKK and the funeral services proceeded without much disturbance. In trying desperately and loudly to crash through diversity and unity in this country, the Westboro Baptist Church has begun to thread together a strangeness. While perpetuating hate and misusing their first amendment rights, Westboro Baptist Church has begun to unite a diversity in this country. The evildoers who claim to have God on their side have somehow managed to bring unity from controversy, and alliance from animosity. In their quest for fame and idolization, they have driven a country, once divided, a little bit closer together.

An Op-Ed by: Amy Magness Whatley

One Response to "Westboro Baptist Church the Evildoers"