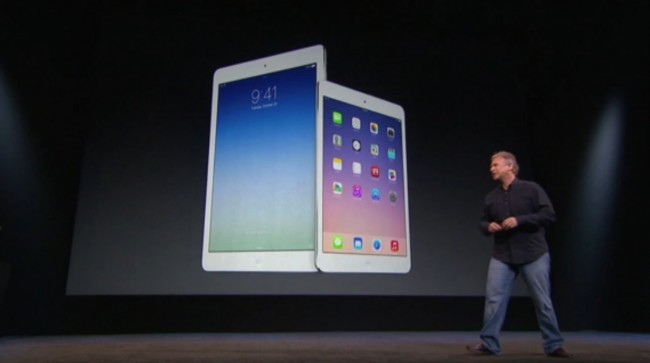 In a surprise move, Apple not only revealed its new iPad Air and redesigned versions of its iPad Mini and other devices Tuesday, but announced that it would give away its Mavericks OS X, the new version of the Mac operating system, to users for free, in a move widely seen as a challenge to Microsoft.

Tim Cook, CEO of the Cupertino, California based company, made these new revelations at an event in San Francisco. Also announced as a free giveaway to users was Apple’s iWork software suite, a competitor with Microsoft Office. Office currently dominates the PC market, along with the even more ubiquitous Windows OS. Because they use these existing applications, the new tablets Microsoft is releasing are seen as a threat to Apple’s market share, especially among business customers.

The iPad Air, a lighter, faster, fifth-generation version of the company’s popular 9.7-inch screen tablet, weighs in at only a pound, and is less than a third of an inch thick. It features a $499 price-tag. It is also the first new flagship tablet since the iPad2 was introduced in 2011, and the redesigned device is also the first iPad in the line to receive a unique name rather than a mere number or size descriptor.

Apple also announced that it would release a new version of the smaller iPad Mini, with its 7.9-inch screen updated to the company’s new high-resolution Retina display, which would retail for $399, while the original iPad mini would still be on sale for $299. The company also announced faster redesigns in the areas of desktop and laptop PCs, with the desktop Mac Pro retailing for $2,999 and featuring a 3.7GHz quad-core processor, and new versions of the MacBook Pro laptop retailing for $1,299 (13-inch) and $1,999 (15-inch).

The new iPads enters a more competitive tablet market than previous Apple offerings have faced. Microsoft has been making its own inroads into the tablet computer market with Windows-powered devices like the Surface Pro, while Google’s Android OS—which already dominates the smartphone market—is already featured on a wide array of tablets from multiple manufacturers, including Amazon’s Kindle line and the Samsung Note.

Despite Android’s growing popularity as an open platform for development, however, most don’t see these latest moves as intended to directly compete with any of the various Android products specifically. Instead, the offer of the new Mac OS for free along with iWork is seen, along with the iPad Air, as a challenge to Microsoft. Quoted by Reuters, Gartner analyst Carolian Milanesi said, “In the tablet PC market, they do think Microsoft is a bigger threat than Android. The iPad Air will compete with Surface Pro.”

Though most analysts do not see Android as Apple’s target, the company has seen its profits and market share decline as Android tablets have proliferated. These Google-powered tablets tend to feature lower price points and other features such as higher resolution screens, making them attractive to the same customers who have previously purchased Android phones for similar reasons.

Apple’s profits have been declining for two straight quarters, and their share of the tablet market went from 60 percent to 32 percent in a year. These setbacks have shown in the company’s stock price, which is down more than 25-percent from a record high in September of last year. With Microsoft threatening the tablet market, Apple’s increase competition in the PC area may be a similar foray into an area currently dominated by its rival.

The PC market, however, is shrinking as the tablet market grows. PC shipments fell 8.6-percent in the third quarter, their lowest level since 2008. Meanwhile, tablet sales doubled in 2012 to 166 million units shipped. In a quote for Bloomberg, OakBrook Investments LLC head trader Giri Cherukuri, whose company manages a large number of Apple shares, said “When the iPad first came out, people saw it more as a consumption device for watching movies or reading books, but now people are actually using (tablets) as laptop replacements, like a real computer, and that’s just going to continue.”

To survive a decline in PC use, Microsoft has to challenge Apple’s iPad air and other devices in the tablet market, just as giving away its new Mac OS for free is a way of bringing the fight back to Microsoft.