Banksy Offers Steal of the Century 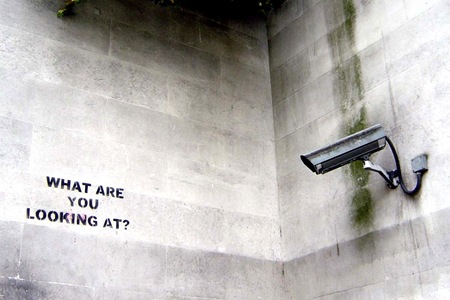 The ever-elusive street artist only known as “Banksy” has become a prominent part of society through his provocative stenciled artworks. Though his identity is unknown, his ability and ambiguity precedes him in the world of artists and fanatics. Recently this “John Doe” of the art world offered New York City the steal of the century.

Sunday, the anonymous British artist’s work showed up in New York’s Central Park guarded by an elderly man who was stationed to sell Banksy’s artwork. The astonishing asking price for each piece: $60.

Starting out as a graffiti artist in the early 90s, Banksy became a well-known artist by the late 90s in London and Bristol. He coined a recognizable style that became popular among the masses-ordinary people who adored his work. Banksy’s work and his mysterious persona have become social memes. His work has always encapsulated a strong political point of view; his themes are often inspired by his views on capitalism, greed, poverty and the Royal family. His edginess and no-nonsense personality have made his artwork easily accessible to many and have allowed him a six figure asking price for much of it.

The paintings, according to the video recording of the event, sat for four hours before anyone made an offer to purchase. The lucky customer received two for $60.  Apparently, Banksy has a sense of humor as well as an unerring sense of the ironic.

In 2010, Banksy was selected as one of the world’s most influential people by Time Magazine. The picture that accompanied the article was Banksy with a paper bag over his head. His truest fans have no desire to discover who the artist is; their appreciation for his work runs much deeper than the public’s usual enthusiasm for celebrity.  He has accumulated a following that believes what he stands for, both as an artist and an activist.

There is a sense among his supporters that Banksy is an outsider to the art world who somehow speaks to the concerns of the average person. He is part urban Picasso and part Robin Hood; the difference is that many people who like and support Banksy’s work may not like Picasso’s art. Street art, as it has always been practiced in the past, has existed outside of the galleries and beyond the reach of art dealers. Banksy has successfully entered the gallery, albeit through the back door. And, for many people who may not understand or even like contemporary art or modern art, Banksy’s success may be regarded as a sign that they or we have made it—because he, Banksy, is one of us.

The name Banksy has been surrounded by questions and controversy; but, beyond all that, there is a sense of intrigue that stimulates the imagination of those who are fascinated by the artist and his work. Whether in his street paintings or his gallery work sold to collectors, Banksy has single-handedly transformed our notions of vandalism and street art. He has also presented the art world with a new form of art and new ways to think about art in general. Banksy’s real legacy will be that as a street artist he crossed into the gallery art world. He then took the discussion about art, consumerism, social commentary and “vandalism” away from the galleries, dealers and elites– and brought it to mass audiences (the people in the street)—and now Banksy has brought us all back into the gallery world again but with a twist—by offering the man on the street the steal of the century.