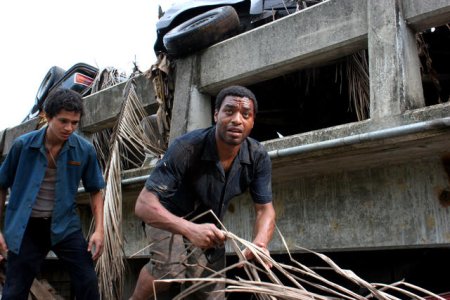 Solomon Northup was an African-American born free in 1808 in New York. Seduced with a job opportunity, Northup reportedly was tricked by his new boss, then drugged, kidnapped and sold into slavery in 1841. After spending 12 years in servitude at a Louisiana plantation, he became one of a very few number of slaves to regain freedom.

Northup, after becoming reunited with his family, became a well-known abolitionist and spent the first year of his freedom writing about his 12 years of suffering in the book 12 Years as a Slave, in 1853. He also toured the Northeast speaking about his life as an oppressed black man torn from his family and heaved into the life of a slavery.

In the 1860s, Northup also became an important participant in helping fugitive slaves escape via the Underground Railroad. The actual date of his death and the circumstance surrounding it are still unknown, though it is believed he died in or around 1863.

Accepting the role of Northup, Chiwetel Ejiofor studied the memoirs of his life, learned to play violin as Northup had and visited many plantations. Scrutinizing the life of a man whose legacy has captivated students, historians and readers alike, though, was not enough for the shoes Ejiofor was stepping into- nothing could have prepared him for the intense emotional awakening that would take him over as he embodied Solomon Northup.

Ejiofor received his first acting break from Steven Spielberg in the movie Amistad in 1996.  The movie, another historical drama, was the story of an 1839 mutiny aboard a slave-ship and was perhaps the perfect interim for Ejiofor’s latest performance.

Directed by Steve McQueen, the movie adaptation of Northup’s 12 Years as a Slave has been called an “unblinking portrait” of Solomon’s chronicles. Playing such a psychologically scarring role could be distressing to many actors, especially those who never break character for the entirety of the film, but for Chiwetel Ejiofor stepping into the character felt “fascinating,” he said, adding, “there was as much to take away from it that was redemptive as there was that was harsh or difficult.”

What many critics are applauding in Chiwetel’s depiction of Norhup, aside from his methodic intensity, is the effortless way his eyes tell a story throughout this harrowing film. Given the daunting task of playing such a naïve man thrown into a world so unbelievable and brutal, Chiwetel found a way to portray him as a man who struggled to comprehend the cruelties being inflicted upon him. With his eyes, he was able to captivate the audience and bring the heroic character to life once more. Using silent movies as a platform from which to mold himself and fine-tuning a technique of communicating without words, Chiwetel Ejiofor has Embodied Solomon Northup.