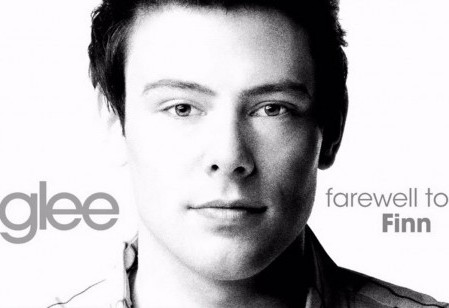 Cory Monteith’s tragic overdose of heroin and alcohol in a deserted Vancouver hotel room threw Hollywood into a maelstrom of shock and grief. Producers of the popular Fox Network television show, Glee, were caught in a difficult position. The actor who played one of the pivotal roles in the show was dead. Glee had lost its quarterback and a loved member of the cast. After the shock wore off they knew that a farewell to Cory and Finn Hudson would be in order but it would be hard. Cory’s character was a very important anchor for the show’s audience. A final Glee episode would have to say so long to both the man and the character.

It would be hard, even more so because the shows other pivotal role, played by Lea Michele, was Finn’s/Cory’s on and off screen girlfriend. She was the other half of the anchor. Producers were prepared to end the show, if grief was too deep for the show,s cast. But Michele stated that Glee must continue for the fans. While the friends and family of Monteith mourned, the powers that be decided to dedicate a show to Cory. One that would honor the young actor just starting out in his career and that would explain his character’s absence from the show.

Monteith played Finn Hudson. A sports star who is recruited into the choir, he falls in love with fellow Glee member Rachel Berry. Audiences loved the pairing of the two characters and their love affair was integral to the overall show. The death of “Finn Hudson” left a huge gap in the show and the death of Monteith struck his fellow actors hard.

It was finally decided to have an episode dedicated to the late actor and one that eased his character out of the show. That episode will air tonight and it begins with Finn Hudson’s death a fait accompli of a few weeks prior to the events of the show. As suspected before the episode was aired, there is never any mention of what caused the death of Hudson, just the reactions of those who knew him.

This final episode, dedicated to Cory Monteith, will give all the people who’d been touched by the young actor a chance to say goodbye. Sure, the show’s focus is on saying so long to Finn Hudson, but it was really Cory that folks are saying farewell to.

The show is a real tissue grabbing episode. The show’s creator Ryan Murphy said that he’d never seen a crew so overcome with tears and grief. Murphy said that the outpouring actually slowed production down in some cases, but also brought about scenes that were shot in one take.

Lea Michele has the opening number and old cast members will reappear to pay homage to the imaginary character that Monteith portrayed. The only Glee alumnus who could not return for the memorial episode was Dianna Agron, who played Quinn, she could not attend because of scheduling conflicts. Not, as rumored, because Lea and Ryan Murphy did not want her there.

Gleeks who are addicted to the program will spend an emotional time in front of the television and hopefully the cast and crew will have gotten a final bit of closure. Fans will remember the show for a long time and despite being reminded of Monteith’s death every time they see “Rachel Berry” on the show, they too will be able to move on.

It is a tragedy that Cory Monteith’s self admitted drug problem managed to kill him when he made the mistake that a lot of rehab graduates do. His tolerance, or lack of it, killed him as surely as the heroin/alcohol mix. A career just starting ended before it really began and a love lost before it had a chance to grow.

The episode tonight will show mourning Glee style and it will feel real. The actors, especially Michele, had real feelings for the young man who all said was the nicest fellow they knew. In a business that is all too often callous about its denizens, Fox Network has allowed the cast, crew, and fans a last chance to say goodbye to the young man who had to leave the party way too soon.

At the Primetime Emmy Awards in September this year, quite a lot of people were annoyed that the relative newcomer’s death was honored on the show when other veterans and previous award winners were not. As much as the public mourns the loss of an old favorite star or actor, nothing is more keenly felt than the loss of a life too young to become a favorite.

But Cory Monteith’s final episode of Glee, gives everyone the chance to say, So long Cory/Finn, you will be missed.