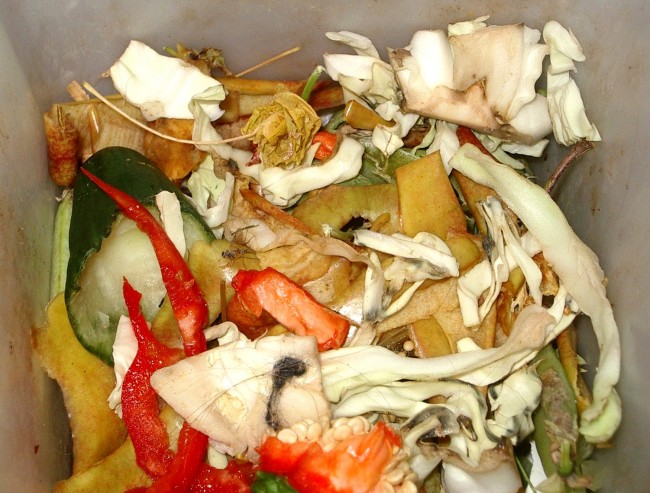 Engineers from the Colorado School of Mines have discovered a method of mining our food waste like rice husks, banana peels, and eggshells we’d normally throw away into glass. Our food waste could become a new mining source for the world’s demand for glass.

They have a laboratory at their disposal that Walter White of Breaking Bad (if he was still alive) would be jealous of.

Students there donate their food waste, which is placed into blenders and ground. What results is dried and then pounded until it becomes a powdery white substance made of minerals like oxides and silica. Usually, these minerals have to be mined, which involves using poisonous chemicals and heavy mechanical diggers.

The resultant silica powder is placed into an oven heated to 3,000 degrees. It’s melted until it becomes molten hot, and it’s then poured into molds, where it cools and results in crystal-clear glass.

When food and agricultural waste materials are put into landfills and decomposes, it produces greenhouse gas. Ivan Cornejo and his fellow engineers at the Colorado School of Mines are trying to figure out just how much of the world’s greenhouse gases could be reduced if all of that waste didn’t end up decomposing, but was instead turned into glass.

Cornejo and his team just might redefine what mining is about, to encompass new sources of minerals, such as agricultural and food waste. Instead of having huge craters dug into the surface of the Earth  in  order to get the minerals needed to meet the world’s demand for glass, we might soon be able to get some of the minerals we need through the food waste we usually throw away.

According to Cornejo, the open-pit mines are “all over the world,” though much of the silica that comes from mines “is coming from Brazil and China.”

Though open-pit mines won’t end overnight, there is hope that the world’s need for them will be greatly reduced. As Cornejo puts it:

There’s no reason to continue mining, destroying the environment, when we can find many of the materials we need from waste.”

At Corning Inc., Cornejo was one of the people instrumental in developing Gorilla Glass. Gorilla Glass is used in making many high-performance products, such as smartphones.

He didn’t have his idea about turning food waste into glass until this year. There was a report he heard on the radio about people trying to decide if reaching an underground source of calcium carbonate was worth destroying the forest which was above it.

That was when he and Ivar Reimanis, a fellow engineer, and Subramanian Ramalingam, had the inspiration to look to other sources for minerals.

They needed to have very expensive laboratory equipment to make their idea of converting waste food into glass become possible. They got rid of the lab’s aluminum crucibles and replaced them with platinum ones which cost $10,000.

Cornejo and the other engineers also must wear protective jackets, face shields, and goggles, and use tongs to handle the red-hot molten liquid within the molds as it is transformed into glass.

Altogether, approximately 36 million tons of silica are needed to meet the increasing global demand for glass. Food and agricultural waste that is ordinarily thrown away might be able to meet this demand, and do it more economically, while also reducing greenhouse gases.

Cornejo held up a piece of clear gas weighing 60 grams. He said “I mean, this was rotten garbage.” Before it was transformed into glass, the ingredients used were rice husks, banana peels, and eggshells which — before being cooked — weighed 240 grams.

Now, Cornejo and company are trying out other items, such as coffee grounds, avocado seeds, and peanut shells. Also, they plan on figuring out what minerals can be mined from farm waste, as well as the waste matter from cafeterias and feedlots.

The mining of silica from food waste is just the beginning. After Cornejo and his fellow engineers learn what other minerals can be mined from food and agricultural wastes, they might be able to eliminate the need for other sorts of mines, as well.