Gay Marriage Not Child Marriage but It Is Incest Says Corbett

By Rebecca Savastio on October 4, 20134 Comments 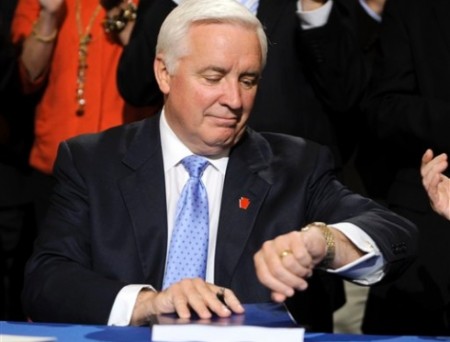 He has already issued an apology for his vastly ignorant remarks, but Tom Corbett shook things up pretty soundly earlier today when he said that no, gay marriage is not exactly the same as child marriage, but would be better identified as incest. His dumb comments came in an interview when he was asked about another asinine comment made by one of his legal staff members. That remark compared gay people to children and that analogy was put forth as a reason why their marriages should be illegal.

The interviewer asked Corbett if he agreed that gay people were like children, and he replied “It was an inappropriate analogy, you know. I think a much better analogy would have been brother and sister, don’t you?”

At that point, the interview took a long pause during which time she was probably think to herself “oh s***! What do I say to that?!” She then hesitantly said “I don’t know… I don’t know” before throwing the question back to him and saying the commentary should come from his camp. (Good save, there!)

Of course, as is the case whenever someone makes a colossally idiotic remark (who can forget the “binders full of women” debacle of 2012?) the internet was set immediately ablaze with furious commentary from the gay community as well as Democrats, who never miss an opportunity to use someone’s duncehood for their own political gain.

Twitter and Facebook were flooded with ridicule, and Gov. Peter Shumlin denounced the comment as “an absurd comparison of same-sex marriage (that is) offensive and demeaning.” Gay rights groups did a virtual nod of agreement.

Setting aside all the politicking that this brings up and the inevitable points scored for Democrats because of this comment, let’s just take a step back and examine why the remark is very stupid. Because it is stupid.

Apologies to anyone reading this who has an IQ over 60, but apparently, this elementary explanation is necessary for the likes of Tom Corbett and his ignorant ilk:

Firstly, homosexuality is a completely 100% natural phenomenon that occurs regularly in many species within the animal kingdom. It is as natural as heterosexuality, bisexuality or any other type of  inborn sexuality. It is a variation on human sexuality that is equivalent to all other variations and is absolutely equal in its naturalness.

There is nothing that varies between gay and straight people except that gay people are sexually oriented toward members of their gender and heterosexual people are oriented to people who are not members of their gender. There are no other differences in any other aspect of gays as a whole when it comes to comparison with straights except for this one minor detail of genitalia.

Secondly, saying dumb, outdated things like “gay marriage is like marriage between brother and sister” is not going to help anyone’s political career and will only invite ridicule and scorn and may even prevent reelection.

Thirdly, saying things of that nature shows an inability to progress with modern times and illustrates a total disconnect from reality and science. It moves society backward which is a very unpleasant sensation.

Poor, poor stupid Tom Corbett. He says gay marriage is not child marriage but it is like incest. For this, he wins two awards: the Dunce of the Week Award and the Obsolete Old White Man Award.