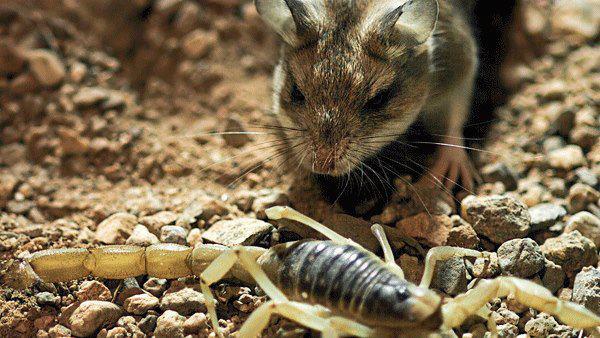 Grasshopper mice have a food that they love to devour at every chance they get: scorpions. They sting of the scorpions, even bark scorpions, don’t bother them at all. The grasshopper mice eat them at every opportunity that they get, with no ill effect to their health. But, how do they do it, when other mammals, including humans, would suffer intense agony?

A recent study has shown just how the grasshopper mice can endure the stings of scorpions, shrugging them off as if it was no big deal to them at all.

The scorpion venom activated a nerve-cell signaling channel in the house mice, which caused them to experience pain. However, this channel, in the grasshopper mice, was not activated, so they did not experience the same pain that the house mice felt.

Instead, an entirely different channel or pathway was activated,  one which acted  to block pain signals. In other words, scorpion venom, to grasshopper mice, has an analgesic effect, rather than causing than to feel pain. The venom of the scorpions was bound to the amino acids (known as 1.7 and 1.8) in the sodium channels in the pain neurons of the grasshopper mice, and this blocked the pain neurons from sending pain signals to the brains of the mice. This research can be read in its entirety in the journal Science.

As in martial arts, according to Michigan State University Professor Ashlee Rowe, the grasshopper mice “use the scorpions’ greatest strength against them.”

Besides bark scorpions, whose venom is potent enough to kill small children, the diet of grasshopper mice includes crickets, other mice, and spiders.

The researchers involved in this study would like their findings to lead to new ways to treat pain that humans feel when stung by scorpions, or even in other cases. Humans stung by a bark scorpions have equated the feeling to that of getting branded.

The research involved in this study, which found exactly how grasshopper mice aren’t affected adversely by scorpion venom, could result in major advances in the biomedical field in the treatment of pain in humans. Perhaps the research will lead to the development of medicines to block the pain neurons in people, or lead to other medical breakthroughs.

4 Responses to "Grasshopper Mice: Why Scorpion Venom Doesn’t Affect Them"