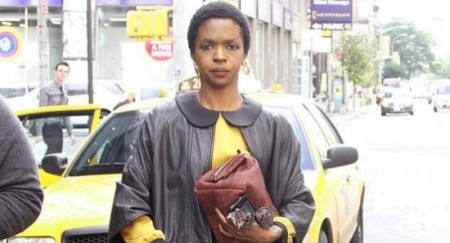 Former Fugees vocalist Lauryn Hill has been released early for good behavior, from a federal prison, after serving three months for tax evasion.  But this is not the only release on the cards for Ms Hill.  She has indeed been a busy bee, both prior to and during her time spent at the Federal Correctional Institution in Connecticut, preparing for the release of her latest track, entitled Consumerism.

Hill, 38, was sentenced on July 8, after pleading guilty for failing to pay outstanding taxes of over $1.8 million, from her earned income between the years 2005 to 2007.  But taking into account Hill’s income and tax losses, from the years 2008 to 2009, the new total was brought up to around $2.3 million.  Hill had reportedly made a promise to make a part payment of approximately $554,000 prior to her hearing and after a federal judge had learned that she had only made a payment of $50,000 of her back taxes, the judge had then given Ms Hill a fortnight to pay the rest of the money.  The judge’s ruling had not been fulfilled by Hill, which consequently led to her sentencing.

Ms Hill had written online in 2002 that she had only received a fraction of the earning due to come to her for her album, The Miseducation Lauryn Hill, for which there had been global sales of 50 million units.  She wrote in frustration about how her 10-year behind-the-scenes battle found her caught up in a series of “traps, manipulations and inequitable business arrangements” and that only this could have put her in the desperate situation she then found herself, leaving her with little choice than to do what she had to in order to protect her creativity, but more importantly, her family, from the issues that were then surrounding her.

But now Ms Hill has linked up with Sony in order to launch a record label that will enable her to release new music and move forward with her career.  She defines the new deal as an ideal platform that gives her more creative and financial control over her work as an artist.

Although she has been released early for good behavior, Ms Hill will still be under house arrest for the next three months and under parole for a year.  But she has asked for leniency due to her charity work and has paid off a substantial $970,000 of her tax bill.

However, none of this has stopped Hill from doing what she seems to be born to do; and that is to continue to subvert the status quo creatively as an artist.  The new track Consumerism is Part 1 of an album collection, entitled Letters From Exile.  Hill had taken to her Tumblr blog to assure fans that she had been given a “warm welcome” from prison inmates, whose open, barrack-style way of day-to-day living included their employment of roles in maintenance, landscaping and food-catering.

Hill explained in a statement on her site that the new track is just a portion of some of the creative works she had been trying to complete before facing her incarceration.  She went on that she and her team had done their best to flesh out some semblance of a mix via a combination of conversations and email, to form Letters From Exile, which she describes as material that was written “from a certain space, in a certain place.”

The former Fugees vocalist continued that she felt a strong need to address what she referred to as the “socio-political, cultural paradigm” as she herself saw it, in her work.  Having not been in touch with current affairs and the news, it perhaps left her headspace clear to focus on what she needed to explore and release, in terms of her creative expression.  She said that this for her was a kind of news in itself and that her need to express her opinion on her recent experiences and observations outweighed her current need to follow the news gatherers’ agenda.

The track Consumerism is a raw mix, with Hill’s sharp, fast-paced poetic rhythms being still very much, if not more, alive and as directly to the point as they ever were.

What remains to be seen is how Ms Lauryn Hill’s performances, both live and within a studio setting, will be received, following her recent prison release, and whether this time she can manage to operate within legal boundaries, having signed her supposedly new, creatively and financially liberating record deal with Sony.