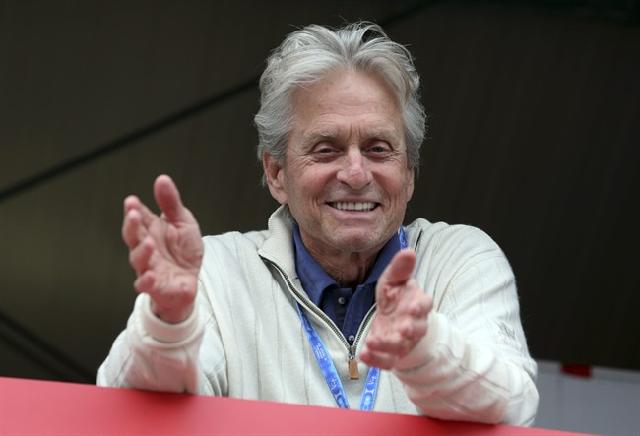 In August 2010, actor Michael Douglas told the media and the world that he had been diagnosed with stage four throat cancer. He had cancer, but it turns out that the Oscar winner lied about the type of cancer that he had.

Michael Douglas, 69, revealed the truth about the type of cancer he had when he was interviewed with Samuel L. Jackson on This Morning, a popular UK talk show. The truth was that  he’d really had tongue cancer, but said that it was throat cancer.

The reason that the actor lied about the type of cancer he had is because he went on a big tour to promote his starring role in Wall Street. He didn’t want to come right out and say that he had tongue cancer, wasn’t feeling well. That might mean he’d have to cancel the tour. But, he thought he needed to tell the media that he had cancer.

According to Douglas, his surgeon told him “Let’s just say it’s throat cancer.” Douglas’ doctor had found a tumor the size of a walnut at the base of the actor’s tongue.

The reasoning behind the lie was that surgery for tongue cancer often left people looking disfigured, and/or scarred, because Douglas might face the loss of a  portion of his tongue and jaw to make sure that all of the tumor was removed successfully.

Douglas didn’t want to have to bring up the possibility with reporters that surgery for his tongue cancer might leave his face disfigured, so he went with the lie about having throat cancer, instead.

In January 2011, after undergoing radiation treatment and chemotherapy rather than surgery, Michael Douglas was pronounced to be tumor-free.

Douglas no longer has tongue cancer, and he’s going to be seen soon in his latest movie, Last Vegas, opening November 1. He will be starring in the flick with Morgan Freeman and Robert De Niro.

The actor has had a long and distinguished career. He bought the rights to the Ken Kesey novel, One Flew Over the Cuckoo’s Nest, from his legendary actor father, Kirk Douglas.

His father wanted to play the role of McMurphy in it, but instead, Michael told him that he thought he’d be too old for the role, so he had Jack Nicholson play McMurphy. Nicholson won an Academy Award for his performance, and Michael Douglas won an Academy Award for Best Picture for producing the movie, which also featured his good friend, Danny DeVito, in a relatively minor role as one of the patients.

In 1984, Michael Douglas starred in and produced Romancing the Stone, which also starred Kathleen Turner. It gave Robert Zemeckis, the film’s director, his first box-office winner. The movie also starred DeVito, who Douglas had shared an apartment with at one time during the 1960s. A year later, the sequel, The Jewel of the Nile, which Douglas also produced, became a box-office hit.

One of the other extremely successful movies which Michael Douglas acted in was when he starred opposite Glenn Close in the 1987 movie, Fatal Attraction.

Michael Douglas has been honored with many awards, such as four Golden Globes Awards. The Cecil B. DeMille Award was one of them. He has also won two Academy Awards, one for one for Best Actor for portraying Gordon Gekko in 1987’s Wall Street and the other one for producing Cuckoo’s Nest, which I mentioned earlier.

In  2013, Michael Douglas garnered an Emmy for his performance as Liberace in Behind the Candelabra (HBO). Some of the other movies he’s starred in include Traffic, The Wonder Boys, The Game, and Falling Down. In 2009, he also won the AFI Life Achievement Award.

Michael Douglas lied about the type of cancer he had, saying that he had throat cancer instead of tongue cancer, but he had a good reason for doing so. At least, it seemed to be a good one at the time — he didn’t want it to get out that his acting career might be over, if he had to face surgery which might disfigure his face.