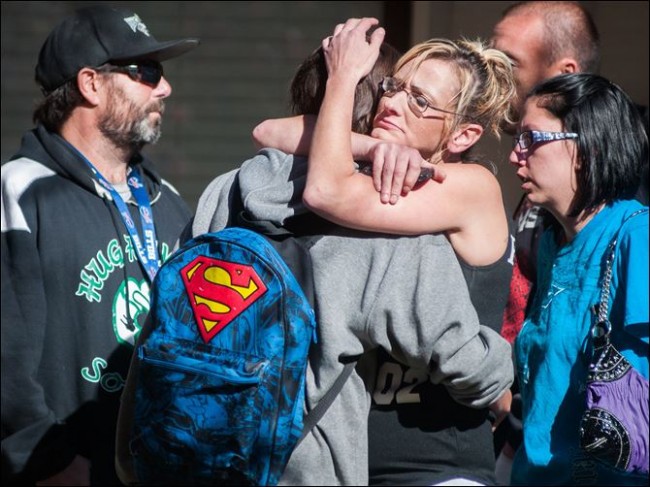 Police responded to several calls about an active shooter at the Sparks middle school, in Sparks Nevada, at 7:15 in the morning from both frightened students and school staff. But when they arrived on the scene the damage had been done.

Mike Landsberry, a math teacher at the Sparks middle school, was shot and killed Monday 21 when a student opened fire on the school. In addition to his time as a teacher, Landsberry served in the military and have been on several tours to Afghanistan. A 13 year old witness said that he saw student fire the gun as the teacher attempted to calm the student and get him to hand over the gun. “It’s very unfortunate,” Martini said, “That someone like that, who protected our country over there, made it home alive only to be killed at his work at a school. This whole thing is devastating.”

An official tried to describe the scene in one word, chaos. Screaming children raced across the school grounds. The shooter hit two children in addition to killing the teacher and then turned the gun on himself. Authorities still say that the motives are unclear and whether or not there had been specific targets, “Or just going on an indiscriminate shooting spree.” Said Tom Robinson, Reno Police Departments Deputy chief.

“The student shot at the teacher and the teacher fell, and everybody ran away.” Said another student, he said he heard four or five gun shots as he ran to cover. Eventually taking refuge in a nearby house with some others.

The hospital said one of the children was in serious condition and the other was in fair condition. One having been shot in the stomach and the other in the shoulder, both remaining at Renown Medical Center.

Students were taken to a nearby high school for their parents to come and pick them up. Authorities state that Sparks Middle school will be closed for the remainder of the week and they closed down nearby Agnes Risley Elementary as well.

This school shooting is just months after the shooting at the Sandy Hook Elementary School in Newtown, Connecticut. Where 26 people were killed and ignited a nationwide debate about gun violence and school safety. A  Nicole Hockley, mother of one of the students killed in the shooting in Newtown said, “The unthinkable has happened yet again, this time in Sparks, Nevada. Our thoughts and prayers are with the victims, their families and the children of Sparks Middle School, who today came face to face with violence that no child should ever experience. Its moments like this that demand that we unite as parents to find common sense solutions that keep out children and all children safe. We need to prevent these tragedies from happening again and again.”

Nevada Governor, Brian Sandoval, wishes to express how deeply broken hearted he is to learn of the horrendous shooting at Sparks Middle school. The prayers of himself and his wife go out to the victims and those that were effected in the tragic events. He hopes that soon this sort of issue will no longer be a threat to our children.

Landsberry is nothing short of a hero to his family, co-workers and his students. “It doesn’t seem real,” said sister-in law Chanda Landsberry. Even though he gave his life to protect the children at the school, none of the students were killed and for that he achieved his goal.

“I wont forget what he did for us,” said a student, “He’ll forever be my hero.”