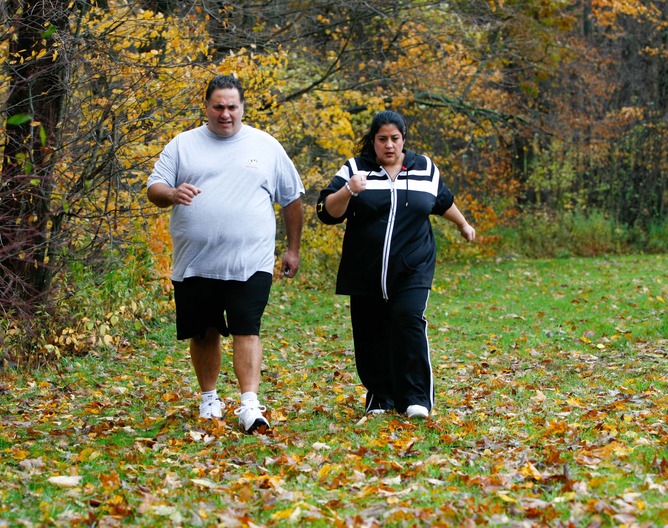 Scientists at Cambridge University are excited by a breakthrough in their researches into the causes of obesity by the discovery of a new gene. Already calling it “the hungry gene” the scientists believe they may at last have solved the perplexing question as to why some people just cannot seem to shed excess body fat, no matter how strict their diet and exercise regimes. In a controlled group of over 2,000 patients identified as severely obese, they found each was carrying a gene mutation KSR2.  These folk were always hungry and their metabolic rate was terribly low, meaning that they burned fewer calories. Those who carry a normal copy of KSR2 in their DNA are unaffected and burn off their calories at a steady rate.  This could, at last, be an explanation as to why seemingly insatiable appetite leads to severe and debilitating obesity.  Dr Sadaf Farooqi, leading the study, remarked: “Changes in diet and levels of physical activity underlie the recent increase in obesity. However, some people gain weight more easily than others. This variation between people is largely influenced by genetic factors.” He went on to explain:”The discovery of a new obesity gene, KSR2, demonstrates that genes can contribute to obesity by lowering the metabolic rate.”

Dr Farooqi has published the results of his breakthrough research into the hunger gene in the scientific journal Cell.He now hopes to proceed with the development of new drugs to target the condition. Obesity is also strongly indicated in cases of Type-2 Diabetes, also on the increase, and these instances could also benefit from this breakthrough discovery.

The announcement comes as the food industry is under increasing scrutiny and pressure to cut sugar levels in many products high in saturated fats. After the astonishing revelations this week that Oreos were as addictive as cocaine, chocolate manufacturers in particular are to be held to account. The UK Government will announce today that they have insisted on chocolate brands such as the Kit Kat biscuit signing a “responsibility pledge” to make their foodstuffs healthier.  In a rather startling metaphor, ministers alleged the new responsibility pledge will equate to the removal of one and a half Olympic swimming pools worth of fat from the nation’s diet.  Nestle,who make Kit Kats, are therefore committing to removing 3,800 tonnes of saturated fats out of the bars. Whether this will be enough to curb the obesity epidemic remains to be seen and the commensurate cases of heart disease and diabetes.  A spokesperson for Kit Kat was quick to reassure that the much-loved two finger snack would not be compromised in quality or taste due to the sat-fat reduction.

Many experts have cautioned that sugar is the enemy in the war against obesity, and not, as is rapidly becoming the accepted wisdom, the saturated fats. One of the underlying causes is the addition of more and more sugars into low fat products to improve their taste. Leading American paediatrician Robert Lustig has argued this vehemently, and written a book Fat Chance: the bitter truth about sugar to raise public awareness.  Top British cardiologist Aheem Malhotra, writing this week in the British Medical Journal, agrees with Lustig. He sees the food industry’s responsibility pledge as nothing more than a gimmick, seen to be paying lip service to the government’s concerns.  Another top Professor, John Ashton of the Faculty of Public Health, has also said that the pledge is a “drop in the ocean” and cannot make enough impression on the momentous scale of the obesity crisis.

With such crippling lack of confidence in high profile attempts to tackle obesity, the timing could not be better for a major breakthrough in the discovery of the hunger gene, the mutated KSR2.  Those who have suffered for years with the inability to shift weight may well be right after all when they moan “Its not me, I’ve got big bones.” It could indeed be true, wrapped in the double helix, the lurking, hitherto undiscovered, destructive obesity gene.