Once Upon a Time in Wonderland Review

ABC’s new show Once Upon a Time in Wonderland is the first spin off from Once Upon a Time, which takes many of the characters from the Enchanted Forrest. In its premiere episode we are introduced to Alice and the very real consequences of a world that would see her story as insane.

The show follows another memorable character, Alice, all grown up and having had a lot more adventures in Wonderland beyond the one we are most familiar with. In fact, it seems that she meet with the genie from Aladdin, whose name is Cyrus, and they fell in love. It was his apparent demise that sent Alice back to London and into an insane asylum.

The episode uses a series of flashbacks to bring the audience up to speed, during an examination with the doctors at the asylum. We discover that Alice returned to Wonderland repeatedly and, upon one such trip, discovered Cyrus’s bottle while attempting to return to her world with the white rabbit as proof that Wonderland was real. Alice and Cyrus traveled the worlds together until the Red Queen attacked them and threw Cyrus off a cliff into the boiling sea. Alice was heartbroken and went home, gave up, and stayed in the insane asylum. 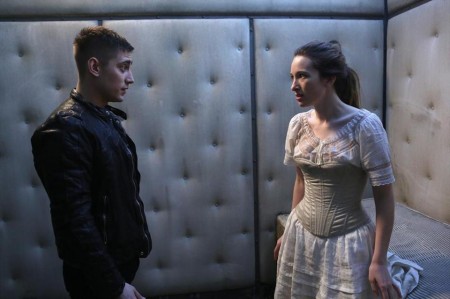 While it is not a new concept to cast Alice, and her wonderland, into a terribly dark light, the idea of a dark insane Alice has been around for a very long time, it was a good mix of the light and the dark. Yet, what this episode sets up in a new adventure for a character we all kind of know. It exists in the same universe as the Once Upon a Time series, which is in its third season now, and one of Alice’s companions, Will, the Knave of Hearts, was also in Storybrooke before being recruited by the White Rabbit to free Alice and help her return to Wonderland.

The plot of the story: Alice is trying to find and reclaim Cyrus, who, she is now convinced, is still alive. It seems that the Red Queen is working with Jafar, who also has Cyrus imprisoned. Jafar seems to have some plan to take Cyrus and the wishes, once he can make Alice use the ones she has.

Since the introduction of the Mad Hatter in Once Upon a Time and the further explanation of the different worlds and how they are connected, it seemed like a ripe opportunity to introduce whatever the writers wanted. And, Once Upon a Time in Wonderland seems to be the first attempt at making that happen. With 5.7 million viewers for its premier episode, it seems like it will have some staying power.

With the popularity of Once Upon a Time, it seems like this was very well timed, especially considering that, in its third season, the cast is hopping around the different worlds on Hook’s ship. Although, perhaps that was part of the plan all along. With Once Upon a Time being so heavily invested in the “magic out of place” Storybrooke for the first two years, doing, mostly, flashbacks to how things were to how they are now, it seems that it had to be taken out of that element in order to introduce something like Wonderland. Now that the curse has been broken, we know everyone connected to Henry and now Peter Pan is the great advisory from another world, the story has moved into the greater exploration of these worlds.

Now, along side the unfolding of Once Upon a Time we have Wonderland and Alice in these new adventures as well. While it might be safe to assume that there will still be the classic story telling structure of the first series in the spin off, it is now growing into an even more complex and amazing universe.

TV by the Numbers

One Response to "Once Upon a Time in Wonderland Review"