By Michael Smith on October 26, 2013Comments Off on Orlando Bloom Doth Romeo Have a New Juliet? 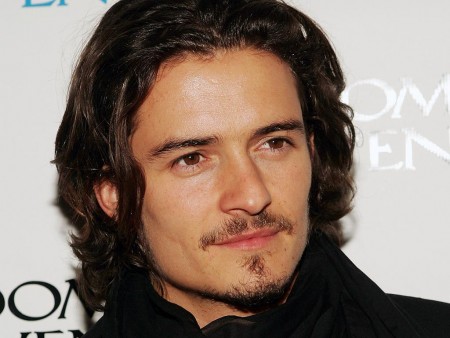 Orlando Bloom stopped by the Live! studios to talk with hosts Kelly and Michael and it sounded a little like Romeo doth have a new Juliet, and not just on stage either. Bloom is playing the lead in Shakespeare’s tragedy Romeo and Juliet on Broadway. Interestingly enough, the actor did not mention Miranda Kerr once on the Friday show.

Considering the fact that the news of his six year relationship with Kerr had just been announced, it seems a bit odd that he didn’t mention it once. One thing that Bloom did talk about was his co-star, his Juliet, Condola Rashad. Not only did the 36 year-old star wax lyrical about her performance, he couldn’t stop talking about the kisses that the two exchange in the Shakespearean tragic romance.

Not one word was passed on about the finish of his three year marriage to supermodel Miranda Kerr, who is the mother of their son Flynn, or that the couple had been separated for months. He did talk a lot about kissing his co-star and he tried to explain to his American hosts what “snogging” meant. A term that could come in handy if the British television show “Marry, Snog, Avoid?” ever makes it across the pond. The television show is about prospective romantic mates whom one should marry outright, just snog, or completely avoid.

In the United Kingdom, snogging means to indulge in a kiss, or a kissing bout, that is both long and enthusiastic. Orlando explained that the term snog, was the British vernacular for “smooch” and he went on to say that it also meant to “really get in there.” Doth Romeo have a new Juliet? Orlando Bloom does onstage, but with all that enthusiastic kissing, Bloom may have found a new romantic interest already.

The two hosts of Live, were taken aback and Michael actually asked his guest for a demonstration. The Lord of the Rings star did go onto to explain that the term is more of a “schoolboy term” and that he and Condola “really go for it” and that the snogging worked.

According to Miranda Kerr’s “soon-to-be ex” it isn’t just Romeo and Juliet who enjoy the kiss, audiences apparently break into applause after their first lip crushing kiss. Orlando revealed that the first one “just goes on.” Bloom appears to be pretty excited about the thought of working with his 26 year-old Shakespearean love interest throughout the run of the play.

Condola is the daughter of Phylicia Rashad from The Cosby Show, she was Claire Huxtable Bill Cosby’s wife in the show, and it comes as no surprise that Bloom has gotten “hooked” on his Juliet in the show.

Apparently, it isn’t just Bloom who seems to be unfazed by the end of his relationship with Kerr. Miranda also appears to be fairly comfortable as well. The couple have said, via a shared statement, that they still respected each other and would work together to be good parents to their son.

Bloom also spoke about the split on Saturday, the day after his appearance on Live! and said that life is always “mystery.” He said that things do not always work out as planned. Looking at the glamorous couple, it would appear that fans are more upset by the split than Bloom or Kerr are.

As Romeo, Orlando Bloom doth seem to have a new Juliet. While the two apparently enjoy their “snogging” sessions onstage, chances are that they may feel the same way offstage. Orlando did say that he was having the time of his life doing the show and that his fellow actors were very close. Presumably not as close to him as Condola Rashad.