Robots Build Own Army What Could Possibly Go Wrong?

By Rebecca Savastio on October 4, 20132 Comments 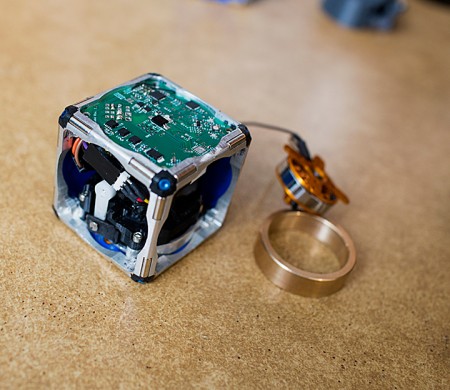 For reasons as yet unknown to the common person, a research team at MIT is currently working on creating robots that can build their own army or transform into any object. Sounds legit. What could possibly go wrong?

The team has already been successful in building robots in the shape of cubes that are able to move by themselves and perform complex acrobatics such as climbing on each other, rolling and jumping up into the air. They can also behave like bats and hang upside down from an elevated surface as long as the surface is metallic.

Kyle Gilpin describes the way the robots are able to rejoin its…er… siblings: “If you drop one of these along the way, or something goes wrong, it can rejoin the group, no problem,” he said. His research partner explains that the team is working toward an army of robots: “We want hundreds of cubes, scattered randomly across the floor, to be able to identify each other, coalesce, and autonomously transform into a chair, or a ladder, or a desk, on demand,” said researcher John Romanishin.

Right now, the robots are tiny, adorable blocks, but if left to their own devices how large could they grow? They’ll have human help in getting bigger; the team at MIT wants to make much larger, self-building robots that can transform into massive objects. Again, what could possibly go wrong?

Well, quite possibly, a lot. Scientific American reports that researchers are on their way to creating robots that are self-aware and have the ability to “reflect on their own thinking.” Hod Lipson, who is a scientist at the Cornell University’s Computational Synthesis Laboratory, says that the key thing researchers are working on is how to make robots that can figure things out on their own. He explains:

“The greatest challenge for robots today is figuring out how to adapt to new situations,” he says. “There are millions of robots out there, mostly in factories, and if everything is in the right place at the right time for them, they are superhuman in their precision, in their power, in their speed, in their ability to work repetitively 24/7 in hazardous environments. The key is for robots to create a model of themselves to figure out what is working and not working in order to adapt.”

Uhm. Ok. But what about putting stop-gap measures in place to ensure that the robots won’t suddenly “figure out” by being “self-aware” that they would rather tell themselves what to do rather than be told by us what to do?

Well, the scientists don’t seem very concerned about that at all, although they do admit the robots could fall prey to a sort of “robot mental illness” that could cause them to have phantom limb syndrome or other psychological and “neurological” disorders. “As robots become more complex and evolve themselves, we could see the same kinds of disorders we [humans can] have appear in machines,” says Lipson.

Dear Mr. Hibson: Forget phantom limb syndrome! What about mania, sociopathology and murderous thoughts? If robots can soon develop the same “disorders” that humans have when it comes to psychology, then shouldn’t we be worried that some of those disorders could possibly be dangerous?

Perhaps the scientists know something we don’t, since they never seem to discuss this aspect of robot development, or maybe they are too concerned with advancing their careers to worry over, say, a violent robot army takeover. For now, the team at MIT is busy making a robot army that can build itself. What could possibly go wrong?