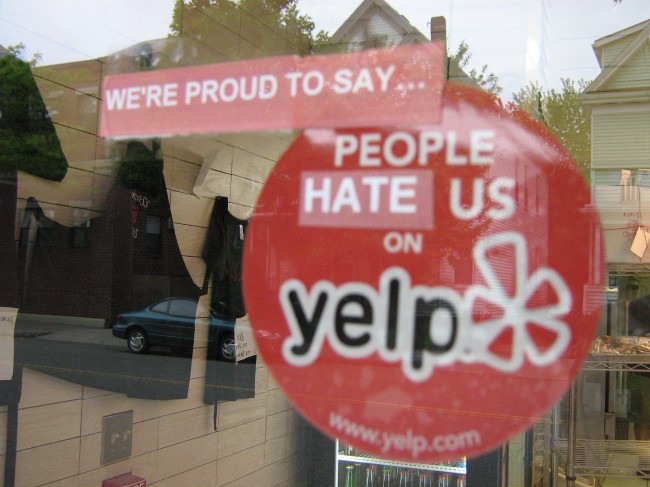 According to an op-ed in the Boston Herald Saturday restaurants are being hurt by negative reviews on the website Yelp. Dave Andelman, president of the Restaurant and Business Alliance in Massachusetts, writes Yelp is “bullying” businesses by not checking whether reviews are truthful. A picture attached to a Facebook post promoting the article purportedly shows a sign on the front window of a local restaurant stating  if the business wants the bad reviews moderated they should purchase advertising on Yelp.

This is not the first complaint against Yelp. Since its inception in 2004 there have been many allegations about Yelp filtering reviews and using strong arm tactics to get businesses, especially those with bad reviews to advertise with Yelp. According to the website MuckRock.com in response to a Freedom of Information request made to the Federal Trade Commission, there were 685 complaints against Yelp. There was no information given as to who filed the complaints and the FTC also states that these complaints were not verified. These complaints included businesses being told by salespeople representing Yelp that they could make bad reviews “go away”, harassment for not buying and filtering of reviews.

“Businesses cannot pay for favorable treatment. You’ll find plenty of Yelp advertisers with negative reviews, and any number of non-advertisers with five-star ratings across the board. The filter doesn’t punish non-advertisers, either. Feel free to check out the many highly rated businesses on Yelp that choose not to advertise on Yelp.”

Is submitting false reviews a problem? According to a Harvard Business School study released this week Yelp identifies about 16% of the reviews submitted to them as fake. Yelp then takes measures to filter these out.  According to Andelman at least one third of these reviews are bogus based on news reports he doesn’t cite. Andelman also claims “Yelp has no way to make sure that the “reviews” are the truthful, honest opinions of consumers. In fact, Yelp can’t be sure that the reviewer is a real person (not someone with many “identities”), or if that person ever went to the restaurant or the business in question.” While he doesn’t mention if Yelp directly answered these allegations, a post on the Yelp blog claims they do filter them and remove the fakes. Yelp has filed and won  suits against alleged fraud and also successfully defended suits brought against them.

Even the Harvard study admits there is no way to determine it a review is real or fake. One of the reasons cited is a lack of a single standard as to what constitutes a “fake” review. The study also lists reasons why someone would file a fake review such as existing businesses that are doing poorly trying to increase sales and competing businesses trying to hurt the competition.

What about other review sites? One of the biggest travel review websites is Trip Advisor and they have also had their share of lawsuits regarding bad reviews, including one for $10 million by a hotel owner in Tennessee who was ranked the “Dirtiest Hotel in America” in 2011. The suit was eventually thrown out.

In an interview with emarketer.com in February 2013, Adam Medros Vice President of Global Products, admitted that it is difficult to screen al reviews but he believes that most people will take an average of the reviews to make their decisions. According to Medros, “Today, when you watch a user interact with user-generated content, they typically look for threads of consistency. They tend to ignore the extremes—the highs and the lows.” In the United Kingdom, the Advertising Standards Agency asked Trip Advisor to take down claims it offered “trusted reviews from real travelers” from their website since they couldn’t prove they did. Another travel website, Expedia.com has instituted a policy that only users who have actually “paid and stayed” at a hotel or motel can submit reviews to their website.

Should you trust these websites? Maybe, maybe not. Here is some advice from Andrea Chang at Rismedia.com:

Remember everyone can have a bad day, the business, the employee or the reviewer, so take each review with a grain of salt.

Author’s Note: After a completely unscientific review of ten random businesses on Yelp there was a pattern of more five star reviews than one star reviews in the filtered reviews.

11 Responses to "Yelping About Yelp"