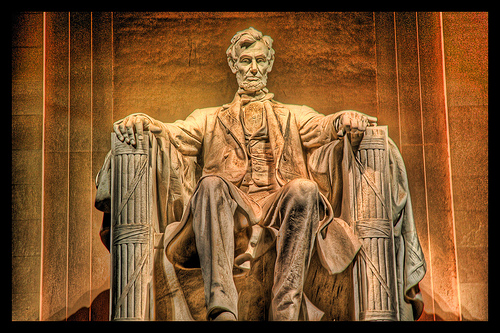 Today marks the 150-year of the November 19, 1863 Gettysburg Address by President Abraham Lincoln, when he recognized and paid tribute to the newly settled Soldiers’ National Cemetery formed to honor those who died in America’s bloodiest battle during the Civil War.  While some say Abraham Lincoln wrote on trains, or wrote rather speedily soon before he presented, what is more likely was that he wrote the Gettysburg Address while he was depressed.

Abraham Lincoln battled depression all his life, and was known to have said that he would never carry a knife because he feared he might take his own life.  Today a scene like Abraham Lincoln slumped over in a chair, staring with a tomb-like expression, would be viewed as a detraction from success and charisma, a “thing” called Clinical Depression. Yet it was his melancholy, his depth of misery, and his absolute resolution to stand in spite of the illness, which enabled him to lead our country in a fashion unique and powerful like no other.

Is there any image quite like Abraham Lincoln standing resolutely at Gettysburg that shapes our history?  Not really.  His affinity to martyrdom, his solemn, towering presence fixates in our minds in spite of the fact that his delivery and life and presidency occurred so long ago.  Maybe today we still stand amazed at medical breakthroughs or concerts or fireworks displays, but back then people wanted a different sort of change.  They wanted to set slaves free, put food on the tables, and read their Bibles, just like Abraham Lincoln.

Although he had a long period of doubt and cynicism in his journey of faith in God, Abraham Lincoln continued reading and meditating on the Bible, which is what his mother had exemplified. Historians have suggested that his son Willie’s death in the Civil War could have alienated him from God, but instead, he turned to clergymen to help him understand “the state of the soul after death.”

Eventually historians have said that Abraham Lincoln began to see the disturbing bloodshed from the Civil War as God’s hand against slavery.  He described this viewpoint not long before his assassination on Good Friday, April 14, 1865, at Ford’s Theater in Washington by actor  John Wilkes Booth in his Second Inaugural Address, shown on the Lincoln Memorial in Washington, D. C.:

“With malice toward none; with charity for all; with firmness in the right, as God gives us to see the right, let us strive on to finish the work we are in; to bind up the nation’s wounds…. “

As we consider the aspect of depression as it relates to the writing and delivery of the Gettysburg address, the profundity of how this illness impacted his perception of reality should be noted. The characteristic of melancholy has been attributed to those who have wise insight in past writings, and supported by a psychological, landmark lab experiment in 1979 by Lyn Abramson and Lauren Alloy.  They instructed subjects to face a console featuring lights and a button, and told them to make a specific light flash however often they could. In the survey afterwards, psychologists Abram and Alloy asked subjects who were not depressed how they performed, and they leaned towards the view that they had control over their actions if they did well. But if they did not perform like they wanted, they claimed to have no control.  Basically these subjects – considered “normal” or “nondepressed” – would accept kudos for success, but easily brush off failures.

As for the ones considered “ill” or “depressed,”  they leaned towards presuming that control was out of their hands.  The key insight in this study is that the  the depressed ones who were popularly assumed as off -based, scattered in thought and action – were absolutely on target. The game had been a farce. The lights went on whether or not the subjects pressed the buttons at the right time.

In the same sense, awhile after his 2-minute Gettysburg Address that Abraham Lincoln had written, the “depressed” yet lucid President called his speech a “flat failure,” which was of course we know is not true today.  But what we can count on is that every word he spoke reflected his expression of deep-felt sadness during the funeral procession for the 3000 brave soldiers who had died.

Abraham Lincoln started writing the speech in his Oval Office in Washington D.C. before traveling to Pennsylvania.  He had started with a whole different combination of words and concepts, but when his feet touched the battlefield in the small town of Gettysburg, the words changed. He mournfully stepped near the tomb of his dear and courageous friend Gen. Reynolds, and began quickly revising the word that would more aptly capture the profound grief and patriotism of the occasion.  However, these famous words stayed:

“The world will little note, nor long remember, what we say here; while it can never forget what they did here.”

When Abraham Lincoln spoke these words it was clear he was someone who was not foreign to the depth of grief.  And the same emotional conviction compelled him to add “under God” to the speech. Lincoln’s last minute addition “under God” is why the Pledge of Allegiance includes this reference today.

Five slightly different versions of Lincoln’s Gettysburg Address have been noted, and the video below captures the one which contains the words “under God.”

Abraham Lincoln wrote the Gettysburg Address standing firm in his fight for his country, not giving into the emptiness and futility of his life-long struggle with depression. Let us all observe a moment of silence in honor of this President who so courageously fought for this country’s freedom.