By Rebecca Savastio on November 19, 20133 Comments 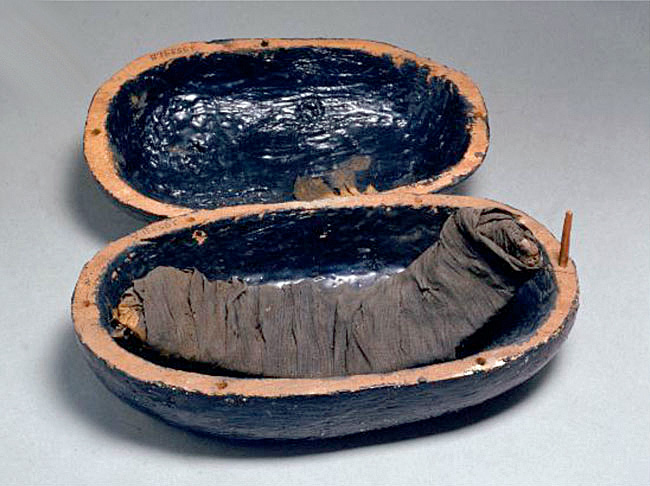 How would you like to chow down on a couple of yummy meat mummies? Scientists have discovered ancient Egyptians would keep their tummies full in the afterlife with preserved meats like ribs, duck, goat meat and beef. The portions of meat got wrapped up in a traditional mummy style; the same way human mummies were wrapped. Egyptians believed that these little packets of food would keep the human mummy well fed after departing from this world.

A new study has been published in the Proceedings of the National Academy of Sciences, and it details how these meat mummies would be preserved. Typically, animal fat or animal fat plus resin from a shrub called pisatcia would be smeared on the cloth used to wrap the meat rather than being applied to the meat directly. The pistacia was a substance that was also a component of a type of varnish. This combination of fat and resin was used primarily on the cloth which was used to wrap beef but would most likely only be found on meats in the tombs of royalty because it was an expensive luxury item.

One of the most famous Egyptians of all time, King Tutankhamun, also known by his nickname King Tut, never had to worry about a rumbling tummy in the afterlife; his tomb was jam packed with food fit for a game-day feast. 48 cases of meat were found in his final resting place, all packaged into elaborately carved wooden boxes. All he would have needed for a party would have been some hot wings and chips to add to his buffet of ribs and other cuts of meat.

Besides preserving the meat with fats and resins, some cuts of meats like duck were dried with salts, much in the same way that beef jerky is made today. The Egyptians were not only concerned with the preservation methods, but they also were careful to ensure that the decedents’ ongoing meals were as tasty as could be. The resin and salts were used as much to impart flavor into the meat as they were for making sure it lasted for eternity.

To complete the study, researchers conducted experiments on four samples of the meat mummies from the 18th Dynasty. A portion of the abstract explains:

We present herein the results of lipid biomarker and stable carbon isotope investigations of tissues, bandaging, and organic balms associated with a variety of meat mummies that reveal that treatments ranged from simple desiccation and wrapping in bandages to, in the case of the tomb of Yuya and Tjuia (18th Dynasty, 1386–1349 BC), a balm associated with a beef rib mummy containing a high abundance of Pistacia resin and, thus, more sophisticated than the balms found on many contemporaneous human mummies.

Yummy meat mummies filled ancient Egyptian tummies in the afterlife, but only those citizens who were considered of very high stature, such as rulers, priests and their families. Being able to chow down on tons of ribs and dried duck would not have been the norm for most people living during the time period.