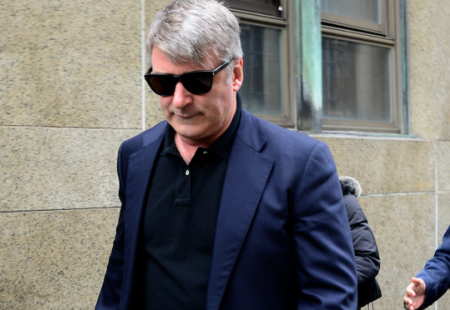 New MSNBC talk show host Alec Baldwin is well known for being a liberal, But, he is also becoming well known as an anti gay anti paparazzi aggressive bully. Is the 55 year-old actor and former star of 30 Rock really as homophobic as his remarks suggest? He definitely seems to fall back on these homophobic slurs at the drop of a hat, or, at least at the drop of a paparazzi.

At a time when the award winning actor should have been celebrating his legal victory over his Canadian stalker, Baldwin was incredibly surly on top of being aggressive. For the 55 year-old actor, aggression seems to be the only way he can deal with the press. Granted, some of his ire came from a case of irresponsible reporting from an English reporter, but, he is tarring all reporters with the same brush and hurting his liberal image while doing so.

Not content to just verbally lambast members of the paparazzi, Baldwin also takes to Twitter to tweet his homophobic rants. GLAAD have taken offense at Alec’s apparent distaste of all things homosexual as well as his use of anti-gay slurs towards those who irritate him.

It is understandable that the star does not want his family or children approached by the media, but, his aggression is inexcusable. Alec Baldwin cannot hide behind his liberal reputation if he continues to be openly anti gay, whether intentionally or not, and anti paparazzi to the point that he commits assault.

After his verbal attacks, Baldwin also posts to Twitter in order to apologise and explain his actions. His latest outburst had the actor calling a member of the paparazzi a “c**ksucking fa**ot.” Nice. He did apologise after being told that his insult was homophobic in nature. The It’s Complicated star also declared he would strike that particular insult from his vocabulary.

As a liberal, Baldwin knows that upsetting GLAAD and members of the LGBT community could cost him popularity points with potential cinema goers. For an individual who has an excellent command of the English language to resort so often to homophobic slurs and “school-yard” taunts calls into question the depths of his liberalism.

Of course, the 30 Rock star does not just verbally insult members of the paparazzi. Baldwin is also making a habit of physically accosting and bullying paps who come into close proximity. At least one person, apart from GLAAD, is taking the actor to task for his behaviour. Journalist Anderson Cooper and Baldwin are engaged in a disagreement that hinges around the actor’s repeated anti-gay slurs and apparent homophobia.

Baldwin and Anderson have exchanged caustic tweets where the journalist and television personality has gone on record saying that the actor’s apologies are not good enough. The award winning actor responded to Anderson’s accusation with derision and another show of aggression towards the gay community.

On top of the actor’s apparent homophobia, he has also been accused of being racist. New York Post photographer G.N. Miller, whom Baldwin picked on prior to his entering the courtroom to testify against his stalker, says that the actor insulted him and his mother.

Miller stated that Baldwin accused him of selling crack and that he also called the photographer a “coon.” Miller said that the actor made insulting statements about his mother as well. Apparently, it seems that Alec Baldwin likes to think of himself as a liberal, but, in reality he comes across as more of a anti gay, anti paparazzi bully. Baldwin also seems to believe that apologising for his repeated unacceptable behaviour makes everything alright. At his age he really should know better, but, this is the same man who called his own daughter a “little pig.”