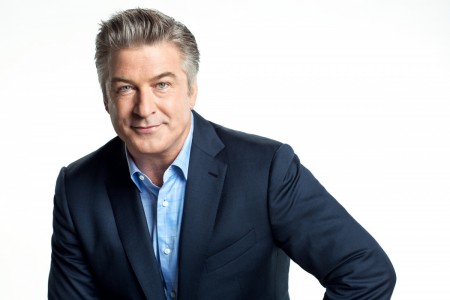 Alec Baldwin and his “fatal attraction” case saw him take the witness stand today and it was a case of sex, lies and courtroom theatrics. Baldwin was not in the best of moods before he entered the courtroom. He paused to trade words the paparazzi G.N. Miller who he spotted outside the Manhattan Criminal Court on his way into testify.

Inside the courtroom, the theatrics were not limited to Baldwin’s alleged stalker. Canadian actress Genevieve Sabourin was charged with 23 counts of harassment and one charge of stalking. Throughout the 55 year-old actor’s testimony, and that of his wife Hilaria, the 41 year-old actress heckled, jeered and screamed at both Baldwin’s as they gave evidence.

Then it was Baldwin’s turn as he broke down in tears  when Sabourin kept accusing him of lying. The Canadian actress was not the only person to say that Alec was telling untruths, the 30 Rock star’s good friend, 87 year-old Scarface producer Martin Bregman agreed with Genevieve.

Speaking to the New York Daily News Bergman claimed that Baldwin was caught with his hands in the proverbial cookie jar. Baldwin says that Martin introduced the actress to him three years prior and they had dinner. Alec says that he only passed on some well meaning career advice for the “mistress” of his good friend.

Bergman denies that he ever had such a relationship with Sabourin and that Baldwin was doing some dancing to explain his connection with the woman. Baldwin has claimed that the actress has bombarded him with over 100 “creepy” emails and numerous voicemails. He also claims that he never had sexual relations with Genevieve.

Alec Baldwin may not have had sex with the actress, but at least two people are accusing him of lies in that regard. His courtroom theatrics; tears on the witness stand, are understandable if his allegations are true. Unfortunately for the actor, his stalker will have her day on the witness stand Wednesday.

According to the Canadian actress’s lawyer his client only wanted closure after her affair with Baldwin ended. While Alec claimed that the two were never intimate his alleged stalker shouted out that he has a scar on his hip. This happened at a point during the trial when Genevieve was trundled out of the courtroom for being disruptive. She was clearly desperate to prove that Alec and his wife are lying.

The judge  presiding over the trial Criminal Court Judge Robert Mandelbaum was not amused by the constant outbursts from Sabourin during the proceedings. At one point he threatened the actress with contempt of court after her constant cacophony of shrieks, shouts and accusations. She continued to accuse both Baldwin and his wife of lying, very loudly.

Sabourin’s behaviour is not helping her side of the case. However, neither is Baldwin’s. Tears on the witness stand is not proof of innocence. The star will not be getting too much in the way of sympathy from the paparazzi with his serious lack of empathy with them. On the way into the courtroom and on his way out, Baldwin had several choice things to say. His closing statement to the paps outside was to wish that they all “choked to death.”

Alec Baldwin and his sex, lies and courtroom theatrics have not proven anything thus far in the trial. Tomorrow his alleged stalker will have her turn on the witness stand, it does make one wonder if Baldwin will be as disruptive when she testifies.